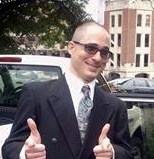 Andrew Gregory Whitlock was born February 20, 1980 and died November 6, 2017, entering this world 9 weeks early and leaving it much earlier than we all wanted. From the beginning, he was fighter, wanting to live his life his way, and not the least bit afraid to buck the system. Andrew was an Army brat, starting life in Little Rock, AR; then moving to Fort Shafter, HI; Ft. Sill, OK; followed with moves to Atlanta, GA; Riyadh, Saudi Arabia and back to Atlanta, which he called home for the rest of his life. He graduated high school from The Heritage School in Newnan, Ga in 1998 and tried college but decided that wasn’t exactly for him. He worked slinging tire and batteries at Sears while looking for jobs in the career field he most wanted to be a part of, anything dealing with computers. Andrew’s love for what we now call Information Technology began at the early age of 7 when he got his first computer, a Commodore 64. Starting in elementary school, he was always playing on his computers, learning how to write programs using different computer languages and how the different equipment interfaced with each. These self-taught skills eventually landing him a job in the field and a highly successful career was started. Andrew grew his skill sets to eventually land his current position in the Cybersecurity, Information Protection, and Hardware Evaluation Research (CIPHER) Lab, Georgia Tech Research Institution where he has been credited with making recent advancements in the security field. He was very proud that this position also allowed him to follow a long family tradition of service to his country which he loved. Andrew was a private person, not one to put himself out there to meet new people. His circle of friends was small but once you were in that circle, you were a friend for life. He was extremely loyal to his family and friends, always there to help when needed. He used his very dry sense of humor to put people at ease and was known for his sharp mind, laid back ways and love for his family and friends. He loved working on old Volkswagens, spending time outdoors, with Cumberland Island, GA being one of his favorite places, and playing with his tech toys. He had a deep love of science and enjoyed reading science fiction. He recently developed a love for bicycling and used this as much as he could. Andrew had a strong belief in what was right and wrong and watching out for the other person. We know a little bit of Andrew will remain in all those that he touched. Andrew is survived by his parents, Anne and Bill Whitlock, father Greg Bouffard, sister and brother-in-law, Ashleigh and Chet Sosebee and their children Wesley and Corinne to whom he was known as Crazy Uncle Andrew, grandmother Joan Sandquist and numerous aunts, uncles and cousins. A Memorial Service will be held on Saturday, Nov. 11, 2017 at 11:00 am at the H.M. Patterson and Son, Spring Hill Funeral Home in Mid-town Atlanta. A Visitation Hour will begin at 10:00 am. A Funeral Mass will be held on Tuesday, November 21 at 10:00 am at Our Lady Star Of The Sea Catholic Church, 106 East Dillingham Street, Saint Marys, Georgia, 31558. Burial to follow at Oak Grove Cemetery in Saint Marys, Georgia. The family asks that if you care to honor Andrew’s life to please make donation’s in Andrew’s name to the Atlanta Bicycle Coalition. They can be made online at www.atlantabike.org.
See more See Less

In Memory Of Andrew Gregory Whitlock