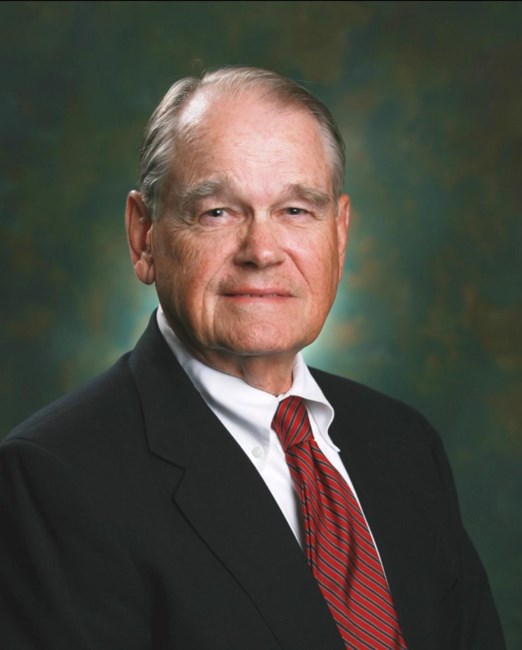 David Henry Gambrell died peacefully at home on May 6, 2021, after a brief period of declining health. A proud and lifelong resident of Atlanta, David graduated from public schools there, and then from Davidson College (1949), and Harvard Law School(1952)with honors. The summer after law school graduation, David met Luck Flanders of Swainsboro, Georgia at the National Democratic Convention in Chicago, and the following year they married and spent an extraordinary 62 years together until Luck’s death in 2015. David began his legal career as an associate partner at King and Spalding in Atlanta. In 1963, he co-founded the firm that became Gambrell and Stolz, which merged in 2007 with what is now Baker Donelson. During his long professional career, David was elected to serve as President of the Atlanta Bar Association (1965-66) and President of the State Bar of Georgia ((1967-68). He was awarded the State Bar’s Distinguished Service Award (2002), The Atlanta Bar’s Leadership Award (2007), and the Outstanding Service Award of the American Bar Association Foundation in 2012. David made time for civic life as well. Among the Boards and Commissions where he dedicated time and expertise were The Atlanta Legal Aid Society, The Atlanta Mission, Habitat for Humanity, The Carter Center, and The Buckhead Coalition. In the 1960s and 1970s, David was active in political life, helping then-State Senator Jimmy Carter in his gubernatorial races, and serving as Chair of the Georgia Democratic Party in 1970. In 1971, he was appointed by then-Governor Carter to fill the unexpired term of US Senator Richard B. Russell. While in Washington, David led the successful effort to pass a $250 million loan guarantee to keep the Lockheed Aircraft Corporation from bankruptcy. At the time, Lockheed was a major Georgia employer and critical to the state’s economy. Not being re-elected to the Senate, David returned to his law practice in Atlanta and took the opportunity to spend more time with family, friends and his interests, which included history and genealogy. His lifelong curiosity about family history led him to remote towns around the world. All of this culminated in his book, “Georgia Girl,” which focused on the life and times of his ancestor Ann Grace in the years leading up to the Civil War. David visited all 159 counties in Georgia and maintained friendships statewide. He spent many hours hunting and fishing in his adopted stomping grounds in Emanuel and Jefferson Counties, and thoroughly enjoyed bringing home wild turkeys to cook for Thanksgiving at Cooter Creek Farm. He also had an agrarian streak that inspired him to cultivate his side yard in Atlanta, startling visitors with urban cornrows and grapevines. For a while, he kept bees, and later made wine in his Buckhead Atlanta kitchen. As a father David was patient and rarely heavy-handed, believing that his children could learn more from making their own decisions and mistakes. As a friend and co-worker, he was a trusted advisor, showing malice toward no one, ever. He was an active member of First Presbyterian Church, where he served as an Elder for many years and taught a men's Bible Class. David moved to Lenbrook Retirement Community after the death of his wife, Luck. There he was able to spend time with many new and old friends, including Jeanne Martin. David and Jeanne married in 2016, and had an active and happy life together attending social and cultural activities, traveling and playing golf whenever possible. In addition to his wife Jeanne, David is survived by his children Luck Davidson, Henry Gambrell, Alice Gambrell (David Rollo), and Mary G. Rolinson (Frank). He also was proud grandfather to Dave, Charlotte (Tyler Quinn), and Kathleen Davidson, and Callum and Duncan Rolinson. The Gambrell family extends deep appreciation to David's Executive Assistant, Bonnie Johnson, who worked with him for a remarkable 33 years. Alisa Bingham and Karen Pittman were constantly there to give David love and care during their many years of helping the entire family. For those who wish to make a donation in memory of David's life, you may send gifts to Atlanta MIssion, Potter's House, P.O. Box 20017, Atlanta, Ga., 30325 or go online to https://Atlantamission.org/ways-to-give/ Due to the health restrictions of Covid-19, the visitation and service for David at H M Pattersons Oglethorpe Hill on Wednesday, May 12 will be small, and will follow mask and social distancing protocols. Only 100 people can be safely seated at the service and this will be strictly enforced for the health and safety of all. Please consider celebrating David's life with the family at a later date, when your health and safety can be assured. We want to thank the many friends who have expressed their love and concern for David in countless ways over the past few months.
See more See Less

In Memory Of David Henry Gambrell