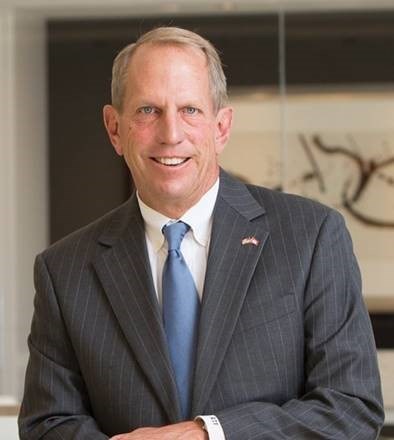 Richard “Skip” Thomas Fulton passed away in his Brookhaven home on July 28, 2022, at the age of 64. Skip was diagnosed with pancreatic cancer in January and fought valiantly until the end. While we mourn Skip’s passing, we remember our dear friend, husband, father, grandfather, brother, uncle, law partner, and so much more. Skip had a one-of-a-kind personality, a smile that lit up every room, a remarkable golf swing, and a generous spirit that welcomed everyone into his home. Skip possessed the optimism essential to being a lifelong Falcons and Georgia Tech football fan and was a loyal Braves supporter through both the good years and the not-so-good years. He was the quintessential Southern gentleman who was as at ease in his kitchen preparing dinner for family and friends as he was in the courtroom preparing for trial. Skip grew up in DeKalb County and attended Briarcliff High School, where he led the Barons as quarterback before graduating from Mercer University in 1979 and Georgetown Law School in 1983. It was during his time in DC that Skip met and fell deeply in love with Cyndi, his wife of 38 years, and upon passing the Georgia bar and joining the Alston & Bird law firm, he and Cyndi returned to Atlanta to build their lives together. Skip spent his entire 35-year career at Alston & Bird where he was the lead lawyer for a number of the firm’s most prominent clients, steering trial teams around the country and defending companies in their most difficult cases. He was a firm leader, serving as hiring partner where he was responsible for recruiting the brightest legal minds from law schools throughout the country. Skip devoted countless hours and his limitless energy to supporting the development of young lawyers and was recognized as a consummate team player, thoughtful mentor and enthusiastic cheerleader. Skip’s legacy at Alston & Bird will be his gracious spirit, his open heart and the many fine lawyers who were hired by him. Skip’s children, Katie Pirkle (husband Russell and grandson Hunter) and Bobby Fulton (wife Lindsay and granddaughter Palmer), were the center of his life and the accomplishment of which he was most proud. There was no father more supportive than Skip on the sidelines of his children’s sporting events. He was Katie’s biggest fan as she played on a state championship basketball team, worked for the Florida State University athletic department and then began her career in sports management after college. Bobby played lacrosse for the nationally ranked Hampden-Sydney team before enlisting in the Army. There was no prouder father or bigger patriot than Skip when Bobby deployed overseas with the Special Operations unit into harm’s way. Once the grandchildren were born, they took center stage for Skip and Cyndi: he was never happier than when spending time with Hunter and Palmer. Nothing meant more than his family to Skip. An avid golfer, Skip was a member of the Druid Hills Golf Club and was blessed with the good fortune that Cyndi loved the game as much as he did. Skip and Cyndi traveled extensively playing many of the world’s finest courses, including courses in Hawaii, Ireland, France, Spain, Portugal, and Costa Rica; Banff, Canada, where they honeymooned; and Colleton River, near Bluffton, SC, where they were club members. While at Georgetown, Skip began an annual golf trip with several law school classmates which expanded over the years to include many of Skip’s colleagues, friends and more recently, their sons and sons-in-law. In June, because Skip was unable to travel, this group convened in Atlanta and celebrated its 40th anniversary with the “Fulton Invitational”, playing several of Skip’s favorite courses such as East Lake Golf Club and Piedmont Driving Club. Skip was a man of broad interests who loved history, especially World War II, and was especially fond of Winston Churchill, whom he would quote regularly and imitate poorly. He was a world traveler with a special affinity for Great Britain, but an open heart for adventure anywhere. He had a vast library of books and wine, both of which he loved to share with friends. Building scale models, listening to music (Linkin Park was a favorite), smoking cigars and good conversation were among his many passions. Skip and Cyndi loved to entertain and the Fulton home was regularly the scene of fabulous dinner parties and celebrations, large and small. Perhaps no such occasion was anticipated more than their annual Christmas Eve party which included family, friends, colleagues, neighbors, and from time to time a very jolly Santa Claus. Skip will always be fondly remembered as one of the best friends you could be blessed to have. He loved and supported those in his life to no end and would put anyone in a good mood the moment he entered the room. People wanted to be around Skip, and he ultimately created an entire community of friends who can trace their ties back to Skip himself. Everyone Skip knew will greatly cherish his impact on their lives and, through the bonds he fostered among them, his memory will live on in their relationships with each other. In addition to his immediate family, Skip is survived by his two sisters, Carol (David) Apple and Dianne (John) Cassara, stepsisters Robyn Fitzgerald, Dianne Henderson, and Carol (Roy) Meadows, and many nieces and nephews whom he loved deeply. He also leaves scores of friends behind from Alston & Bird, Druid Hills Golf Club, and the many members of his adopted family whom he welcomed into his home. A celebration of Skip’s life will be held on Thursday, August 18th at 2:00 pm at All Saints’ Episcopal Church (634 W. Peachtree St. NW, Atlanta, GA 30308). For the men attending: please wear golf shirts and blazers (no suits and ties). In lieu of flowers, Skip’s family asks that donations be directed to Piedmont Hospital’s Andrew Page Pancreas Cancer Research Fund (give.piedmont.org/page) All Saints’ (address above), or University Heights United Methodist Church (1267 Balsam Drive, Decatur, GA 30033).
See more See Less

Send flowers in the next 20 hours for guaranteed delivery.