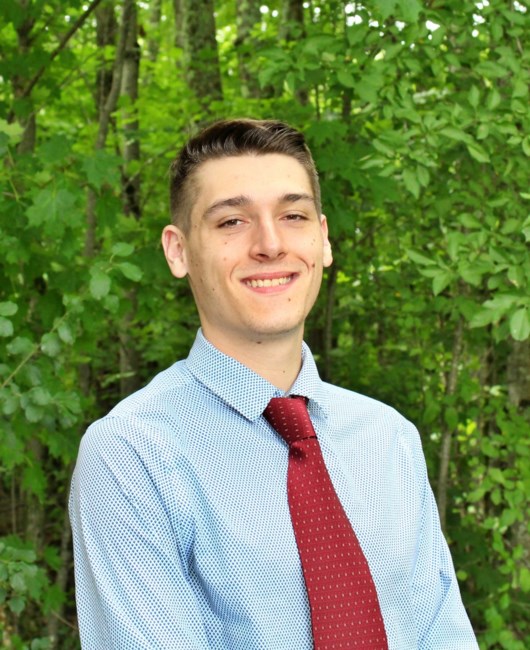 Portland - Dustin Paul Allard, 21, of Monmouth passed away unexpectedly on January 18, 2023. He was born on March 3, 2001 the son of Gary P. and Tammy M. (Lauze) Allard in Lewiston, ME. Dustin graduated from Gardiner Area High School and was in his final semester of his senior year at Thomas College in Waterville where he was majoring in Business Administration. Dustin worked as a real estate agent with Fontaine Family of Realtors in Auburn, he was a child care worker at the Atwood After School Care through the Alfond Youth and Community Center of Greater Waterville in Oakland, and was going through the hiring process to become a police officer with the Oakland Police Department. Becoming a law enforcement officer was a lifelong dream of Dustin’s and the day he passed away, he had completed the physical fitness test and ALERT at the Police Academy. While growing up Dustin was actively involved with sports playing hockey for Maranacook Youth Hockey, Auburn Youth Hockey, Portland Junior Pirates Travel, Gardiner Youth hockey, and two years for Gardiner High School. He ran cross-country and played soccer for a year while in high school but his true love was being part of the tennis team all 4 years and was #1 and Team Captain Senior year, and played a year of tennis at Thomas College before deciding to focus on his studies. While in high school, he was a member of the National Technical Honor Society, which was something that he and his family were very proud of. Dustin had an undying love for his dog Nelly and enjoyed spending time with family and friends. He loved to be active participating in skiing, hunting, target shooting, knee boarding, hiking, and a lot of hockey. He was a vibrant young man that made a lasting impression on everyone he met and worked with. He loved life every day and had a dream of a career in law enforcement and eventually moving out west to live on a ranch. He was known as a strong role model for, and was always loved by children. He cherished the times that he got to spend with his cousins and playing with their children. Dustin had a work ethic that you do not see much anymore and was a consummate gentleman. He always said that he felt he was “born in the wrong generation.” Dustin is survived by his parents Gary and Tammy Allard of Monmouth, grandparents Robert and Jackie Allard of Lewiston, and Peter Lauze of Lewiston; Godparents Bob & Lori Allard of Levant, Aunt Katherine Lauze (Jonathan) of Lewiston; first cousins Randy Allard (Morgan Bradley) of Orrington, Jason and Shannon Allard of Levant, second cousins Issac, Caleb, Wyatt, Olivia, and Levi; and his best friend Nelly, his dog. He was predeceased by his grandmother Elissa Lauze of Lewiston. In lieu of flowers please make donations in Dustin’s name to The Boys & Girls Club Alfond Youth & Community Center by visiting www.clubaycc.org/give please mark “other” After Care Program. The family invites you to a time of visitation to celebrate Dustin’s life on Saturday January 28th from 9:30am to 12:00pm, immediately followed by a Celebration of Life Service at The Fortin Group Auburn, 217 Turner St, Auburn ME. A committal service will take place at St. Peters Cemetery after the Celebration of Life. You may offer your condolences and share your memories at www.thefortingroupauburn.com
See more See Less

In Memory Of Dustin Paul Allard