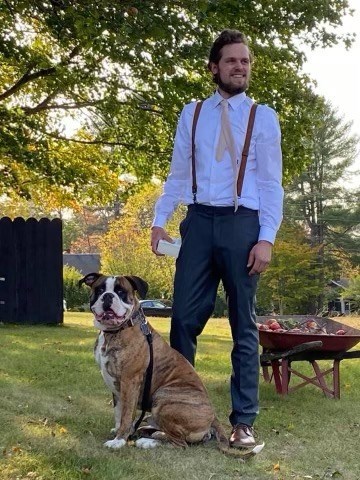 Lisbon- Oland “Ode” Easler, 26, after battling brain cancer for 20 years, passed away on May 6th peacefully at home with many who loved him by his side. Ode was born on October 26th 1995, the son of Jennifer Landry and Oland Easler. Graduating from Edward Little High School in 2014, he then started worked as a ceiling mechanic, installing acoustic ceiling with his mother. Ode fought harder than anyone to beat cancer, with his mom by his side from day one, he did it with strength and never showed weakness. He loved the outdoors, including fishing which he referred to as ripping lips, camping, four wheeling, mud running… actually just mud in general. Ode loved his old modeled cars and trucks, particularly his Amigo. Ode had the biggest heart of anyone and was always ready to lend a helping hand when someone needed him. Ode is survived by his parents, Jennifer Landry and her husband Shawn, Oland Easler and his wife Dorothy, his son, Wayland Easler, his fiancé, Keri Woodcock, his grandmothers, Doreen Easler and Dorothy Walker, his sisters, Paula Verrill and her fiancé Travis Best, Ashley Corliss and her husband Derek, Stacia Easler, as well as several aunts, uncles, nieces and nephews. Ode is predeceased by his grandfather, Roland Easler, his grandmother Sandra Goulet, his nephew Cameron Sylas Best, and several great-grandparents. If you wish to make a memorial donation in Ode’s name, you can do so by sending them Lisbon Community Credit Union to help support Wayland Easler. A memorial visitation will be held Saturday May 21st at the Fortin Group Auburn, 217 Turner St. from 2PM-6PM with a Words of Remembrance period starting at 6PM.
See more See Less