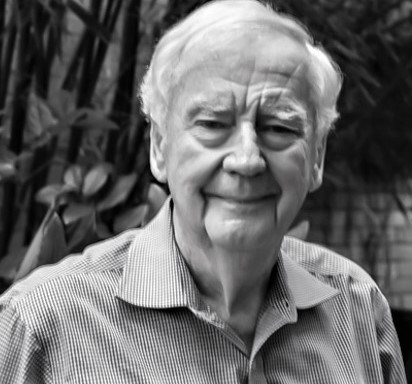 Alan Herbert Cowley was born in Manchester, UK, on January 29, 1934 to Dora Smalley Cowley and Herbert Cowley. He passed away peacefully on August 2, 2020. He is survived by a wife, Deborah Cole and children Dr. Peter Cowley and Susan Cowley, daughter-in-law Zuleika Cowley, Dr. Alison Wilson and Bryan Wilson, Emily Leongini and Tony Leongini and Martha Cowley. He was predeceased by son David Cowley. He is also survived by grandchildren Jake Cowley, Cyd Cowley, Saxon Cowley, Maria Victoria Cowley, Nick Wilson, James Wilson, Will Wilson, Peter Wilson, Conrad Leongini and Stella Leongini. He is also survived by a sister, Stella Cowley and first wife, Maria Cowley. He leaves scores of colleagues throughout the world and scientific community. He leaves behind over 100 scientific offspring whom he mentored over 5 decades with the University of Texas. He was educated at the Russell School for Boys (UK) and received Bachelor and Doctorate degrees in chemistry from the University of Manchester in 1958. Following a postdoctoral position at the University of Florida he returned to the UK to take a research position with Imperial Chemical Industries. In 1962, he accepted an assistant professorship at The University of Texas at Austin where he rose through the ranks and held the Robert A. Welch Chair in Chemistry for many years until he retired in 2015. He played a pivotal leadership role in Inorganic chemistry in the department at UT. During his academic career Alan established himself as one of the leading figures in the renaissance of main group chemistry and authored over 500 publications in the literature. His specialty was the chemistry of the heavier group 15 elements (phosphorus, arsenic and antimony). Alan’s pioneering work in the field was recognized by his receipt of numerous awards including a Guggenheim Fellowship, the Royal Society of Chemistry Award for Main Group Chemistry and the American Chemical Society Award for Distinguished Service in the Advancement of lnorganic Chemistry. Alan received the order of ‘Chevalier dans l’Ordre des Palmes Academiques’ from the French government in 1977 and was elected a Fellow of the Royal Society in England in 1988. Alan served on the Gordon Research Conference Board of Trustees for over 10 years guiding the sharing of cutting edge scientific research. Alan was an excellent squash player and played with many partners over the years at UT. He also was very fond of travel and in particular international travel (in a first class seat on American Airlines). There will be a celebration of life at a later date in Colorado. Memorial contributions may be made to the Alan H. Cowley Graduate Fellowship fund at the University of Texas. https://cns.utexas.edu/alan-cowley
See more See Less

In Memory Of Alan Herbert Cowley