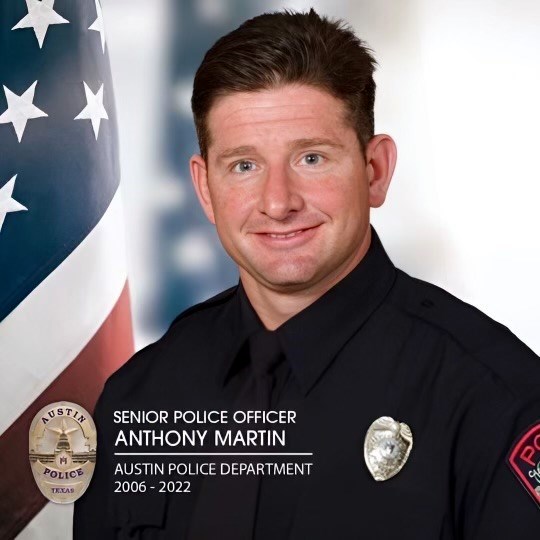 Anthony Dupree Martin, age 54, of Liberty Hill, Texas passed away on Friday, September 23, 2022. Anthony was born in Lake Village, Arkansas on June 18, 1968 to Sandra Kay Smith and Larry Martin. Tony earned a Masters Degree in Education Administration from St. Mary’s University. Tony had a distinguished military career serving his country for 20 years in the United States Air Force. During his time in the military he served with Operation Desert Storm, was a basic training drill instructor where he was recognized for producing nothing but honor flights, competed on the contending warriors team in 1999, was a Phoenix Raven flying special missions and ended his career at the battle lab reaching military equipment. Tony retired with honors as a Master Sergeant (E-7) in 2006. After serving his country, Tony moved to the Austin area where he started his second career serving the community as a police officer. Tony had been with APD since 2006, and during his career served in a variety of assignments including on patrol, Motors, and the DWI unit. Tony received multiple awards from MADD for his continuous commitment to keeping this community safe. Tony still holds the record for highest DWI arrests in a year. Those that knew Tony knew that when he did something he did it proudly and with perfection. His passion was caring for his family and he held them close to his heart. He enjoyed watching his adult children grow and succeed and he adored his granddaughter. He loved watching his youngest daughter, MaryJo, play soccer and was her biggest fan. He loved his wife, Amberlee, and both had plans for a long life together. He is survived by his wife, Amberlee Martin; two daughters, MaryJo Martin and Ashley Martin (Zach); son, Troy Martin (Vicky); granddaughter, Mavis Martin; two brothers, Shane Martin (Debra) and Kevin Shelton; three sisters, Loretta Stell (Glenn), Michelle Kelley, and Loryn Smith; mother, Sandra Smith (Kenny); father, Larry Martin; and several nieces and nephews. A visitation will be held Monday, October 3, 2022 from 10:00 a.m. to 11:00 a.m. at Hill Country Bible Church, 12124 Ranch Road 620, Austin, Texas 78750. A funeral service with police honors will immediately follow at 11:00 a.m. He will be laid to rest following a graveside service with military honors on Tuesday, October 4, 2022 at 1:00 p.m. at Texas State Veterans Cemetery at Abilene, 7457 West Lake Road, Abilene, Texas 79601. In lieu of flowers, contributions may be made in Tony's memory to Cops for Charities. Fond memories and expressions of sympathy may be shared at www.cookwaldenfuneralhome.com for the Martin family.
See more See Less

In Memory Of Anthony Dupree Martin