Please visit https://livestream.com/westlakeumc/SifuentesMemorial at 1:00 PM on Sunday, February 7, 2021 to view the Memorial Serivce. 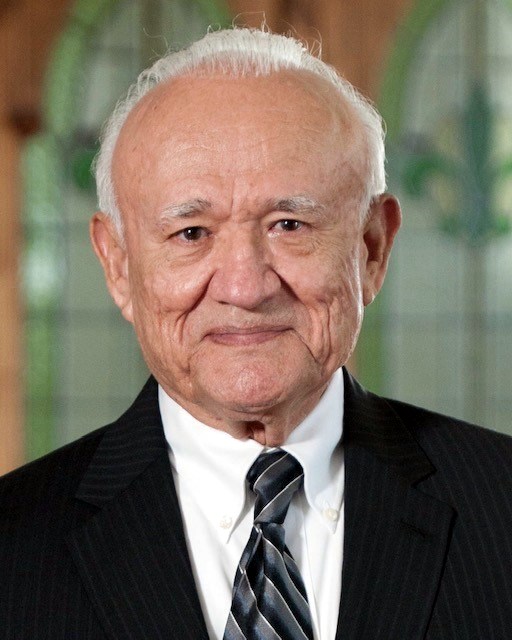 Ben Moreno Sifuentes passed away peacefully at home on December 24, 2020, surrounded by his beloved family. Ben is survived by his loving wife of 68 years, Delia Sifuentes, and their children, Marina Sifuentes and Elizabeth Sifuentes (John Bell) of Austin, and Ben Sifuentes Jr. and Bianca Sifuentes (Charlie Rakosky) of San Antonio. Also surviving are his grandchildren, Marisa S. Davis (Joaquin Ordoñez), Lia S. Davis, Jahan Haj-Ali-Ahmadi and Kayhan Haj-Ali-Ahmadi (Meredith Smith) of Austin, Katerina S. Rakosky of San Antonio, and his great grandsons, Maiel S. Davis Ordoñez and Noé S. Davis Ordoñez. He is also survived by his siblings, Janie Cardenaz, Jesse Martinez, Nash Martinez, Sam Martinez, and Lupe Rosales. He is preceded in death by his mother, Clotilde Sifuentes Martinez and father, Benito Casarez Sifuentes and siblings, Carmen Shepard, Frank Sifuentes, Mary Ruiz, Robert Martinez, Tommy Martinez, Patsy Lujan, and Michael Martinez. Born in Austin on February 7, 1929, Ben was a child of the Great Depression. At age nine, upon his father’s unexpected death, he became the primary wage earner in his family, holding multiple paper routes and shining shoes along Congress Avenue. As a young boy, Ben was a proud member of Boy Scout Troop 1, an early troop in Austin. He was a product of Austin’s public schools, attending Zavala Elementary, University Junior High and Austin High School. He served his country in the Army Air Corp and the Texas National Guard. After graduating from high school in 1948, Ben attended The University of Texas at Austin where he earned a Bachelor of Science in Pharmacy. He married Delia Herrera in 1952, and in 1954, upon graduation, he moved his wife and oldest daughter to San Antonio where he practiced pharmacy at Baptist Memorial Hospital, Mission Pharmacal, and Sommers Rexall Drugs. In 1964, he became the Director of Pharmacy at Southwest Texas Methodist Hospital. In 1971, Ben received his Master of Science Degree at Trinity University and was the first Hispanic graduate from Trinity’s Hospital Administration program. Ben then went to work for Bexar County Hospital District where he was the Hospital Administrator for Robert B. Green Hospital. He became well-known for his innovative and culturally competent outreach programs to the Mexican-American community in San Antonio. In 1975, he left San Antonio for California where Governor Jerry Brown appointed him as the Chief Deputy Director of the Department of Health for the State of California. He spearheaded a project tying the reimbursement of health care services to the appropriateness of the treatment, a practice now known as procedure coding. In 1977, Ben returned to San Antonio to help build Southwest General Hospital where he was the Hospital Administrator. He and Delia returned to Austin in 1987, where he opened S&S Pharmacy on James Casey with his daughter, Marina, also a pharmacist. Ben had come full circle returning to what he loved, pharmacy. He practiced as a pharmacist there for 16 years until they sold the pharmacy in 2003. Ben also served on the Urban Renewal Agency for the City of Austin from 1996-2011, eventually retiring as the Chairperson. He worked on various projects, including the development of the 11th Street Corridor in East Austin. He enjoyed traveling and going on adventures to discover new places. He loved reading, but most of all, he enjoyed time spent with family. He credited his wife’s dedication and organization to his success and recognized her support made his full life possible. Ben always said that it was not enough to succeed, we must help others who come after us gain success as well. He insisted that we must share and look out for each other, especially those who were the most in need, something he always told his children. He said The American Dream was for all of us, but we must ensure that the Hispanic community has access to educational opportunities and quality health care. He was committed to advancing education and health equity in the Hispanic community. Ben was a founding supporter and past board member of the Hispanic Scholarship Consortium. He sponsored over 55 scholarships to Central Texas students from 2004-2015. His legacy will live on in the many Hispanic students he supported and impacted. A virtual celebration of Ben’s life will be held February 7, 2021 at 1 PM, to view the live stream, please visit https://livestream.com/westlakeumc/SifuentesMemorial. His ashes will be buried at his grandfather’s grave at the Oakwood Cemetery in East Austin. In lieu of flowers, the family requests a donation to the Hispanic Scholarship Consortium.
See more See Less

In Memory Of Ben Moreno Sifuentes