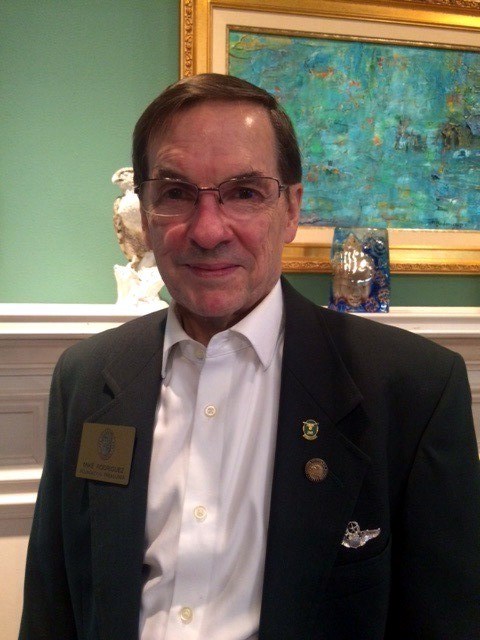 Colonel (Retired) L. Mike Rodriguez passed away on October 22, 2020. Mike will be buried in a private family service at Cook Walden’s Forest Oaks Cemetery on Monday, November 2, at 11:00 a.m. He is survived by his wife, Marilyn, of 53 years of marriage, daughter Reyna Enoch and husband Scott, with grandsons Corbin and Michael; Lara Rodriguez, her husband Bill Gazi and grandchildren Liam, Ava and Olivia; Amy Dykes, her partner James Logue and grandson Rafael Logue. And finally, his siblings; Jose Rodriguez, Jaye Keepers and her husband, Jerry; Anthony Rodriguez, and Anna Rodriguez and her husband, David Martin. Lastly, his step-mother Nilda Rodriguez. Mike was born in Columbus, Ohio, in 1947 to Jose and Evelyn Rodriguez. He was a military kid and graduated from the University of Oklahoma in 1968, and was commissioned as a Second Lieutenant in the Air Force. That summer he started pilot training, after which he deployed to Vietnam flying the O1 aircraft. Over his career, he had many interesting and challenging assignments. With Marilyn and children in tow, some of Mike’s assignments included T-37 Instructor Pilot in San Antonio, Intelligence Site Commander in Berlin, Fighter Pilot in both A-7’s and A-10’s in the U.S., England, and Germany. Additionally, Mike served at the American Embassy in Bonn, Germany, as the United States Air Force Liaison to the American Ambassador in Germany. When Mike retired from the military, he worked as a stock broker for ten years. He and Marilyn continued traveling all over the world. In 2017, they embarked on their dream trip traveling through the South Pacific Islands and New Zealand. It was on this trip they celebrated their 50th wedding anniversary. Mike was an avid volunteer in his Austin and Onion Creek communities, and a lector and mass coordinator at St. Catherine of Siena church. He served as the Commissioner for the City Council’s Advisory Commission for the Austin Bergstrom airport. In addition, he served for many years as the Securities Director for the national Dadaelions organization. Other organizations included ACES, American Legion, and Onion Creek HOA. Mike and a small team of people from Onion Creek and the City were instrumental in bringing about a major change in city government that directed the Austin City Council to draw up ten equal districts, with a representative to be elected from each one that gave all districts equal representation. Mike Rodriguez was known as a man of faith, integrity and perseverance. His family was always his first priority. When he identified something wrong in his community, he would advocate for change until he could bring about positive results. The family requests donations in Mike’s memory be made to M.D. Anderson Cancer Center, Houston, Texas.
See more See Less