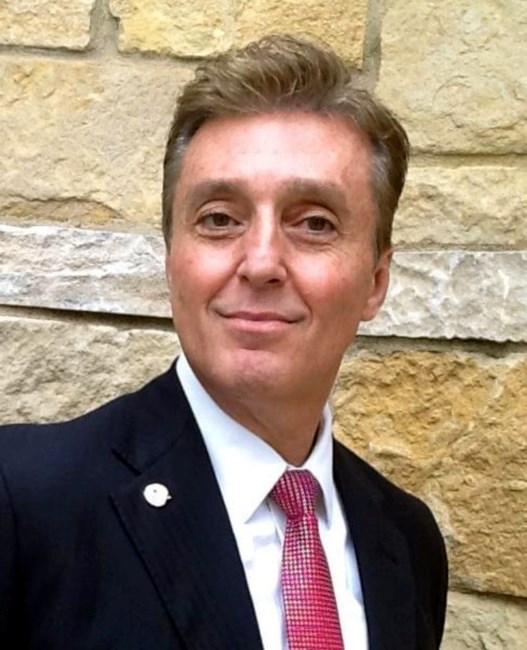 It is with the deep sadness that we announce the loss of our husband, father, family member, and dear friend, Georges Hajje, but we are so grateful for the love and joy he brought into our lives. On Friday, January 21, 2022, Georges Hajje passed away surrounded and celebrated by family and friends after a short hospital stay in Austin, TX due to complications from existing health conditions. Georges was born to Turkish, Christian parents; the late Abboud Hajje and Hind Ghazal Hajje of Beirut, Lebanon on July 3, 1956. George immigrated to the United States from Lebanon in 1979 with his younger brother, Gus Hajje. He said it was the hardest and greatest thing he ever did. He married the love of his life, Tammy, in 1991 in Amarillo, Texas. In Lebanon, Georges was French educated through private Jesuit schools where he spoke four languages. He was educated at four universities (Ohio University, LSU, University of Louisiana of Lafayette and West Texas A&M University) and certified twice in the Six Sigma Black Belt. Georges worked as an aerospace engineer, petroleum engineer and industrial engineer. But early on, Georges worked as a convenience store manager and a manager at Popeyes Fried Chicken. What an incredible coincidence: Tammy loves Popeyes chicken and that started a passion that lasted through sickness and in health, richer or poorer, and that death will not part (their love – not the chicken)! Georges was a private man, but he did not want the experience of his death to be wasted in secrecy. So, it is our prayer that by sharing it, it might bring comfort and support to others with health challenges. In September 2020 George started having difficulties with speech and after months of tests, in August 2021, Georges was diagnosed with Bulbar ALS (Lou Gehrig’s disease). The same disease from the book “Tuesdays with Morrie” …or you may remember the Ice Bucket Challenge that went around the world in 2014. Georges was no stranger to difficult challenges. Immigration, sickness and the tragic car wreck that killed his daughter, Amber, the week of Christmas 2006. He said, “The challenges and sickness became a blessing because it helped me organize what was important in this life." Georges embraced American culture 110% by taking country Western dance classes, never missing an opportunity to vote, attending President Trump's inauguration, and was known to be overcome by emotion at the reciting of the Pledge of Allegiance and the singing of the Star-Spangled Banner. He was a patriot to his core. He was also a Christian. As much as he loved fast cars, capitalism, education, cologne, backgammon, and James Bond movies…he loved his Savior, Jesus Christ, first and foremost. He lived to serve and lift others because he desired to embrace the Lord's culture 110%. Georges lived his entire life loving Christ. He has belonged to the Church of Jesus Christ of Latter-day Saints since April 1991. George's last request and legacy was to tell the world 3 things: 1. Say “I love you.” Loving people is everything. 2. Tell others about Jesus Christ. 3. Live well. Take trips, eat good food, laugh every day and dance. Georges Hajje was a successful family man. He died with his wife passionately in love with him, and his 4 living children, 3 daughter-in-loves and 2 grandsons cherishing and honoring him. Georges Hajje – “the richest man in town”, was truly rich in relationships and is survived by his wife, Tammy Hajje; children, Trey Smith (wife Chelce), Bradford Smith (wife Sharee), Landen Hajje (wife Nikki), and Molly Hajje; and two beautiful grandsons, Boston Hajje and Kash Smith. Georges is also survived by his mother, Hind Ghazal Hajji of Beirut, Lebanon; brother, Gus Hajje of Amarillo, TX (wife Lina); sister, Ghissel Hajji Chamata of Lebanon (husband John); sister, Renee Hajji Abou Chahla of Lebanon (husband Roger); and sister, Lina Hajji Khayat of Dubai (husband Gaby). He is preceded in death by his father, Abboud Hajje, and daughter, Amber Hajje. A visitation for Georges will be held Friday, January 28, 2022 from 6:00 PM to 7:30 PM at Cook-Walden/Forest Oaks Funeral Home and Memorial Park, 6300 West William Cannon Drive, Austin, TX 78749. A visitation will occur Saturday, January 29, 2022 from 11:30 AM to 12:00 PM at The Church of Jesus Christ of Latter-day Saints, 12001 Bee Cave Road, Bee Cave, TX 78738. A funeral service will occur Saturday, January 29, 2022 from 12:00 PM to 2:00 PM at The Church of Jesus Christ of Latter-day Saints, 12001 Bee Cave Road, Bee Cave, TX 78738. Fond memories and expressions of sympathy may be shared at www.cookwaldenforestoaks.com for the Hajje family.
See more See Less

In Memory Of Georges Abboud Hajje