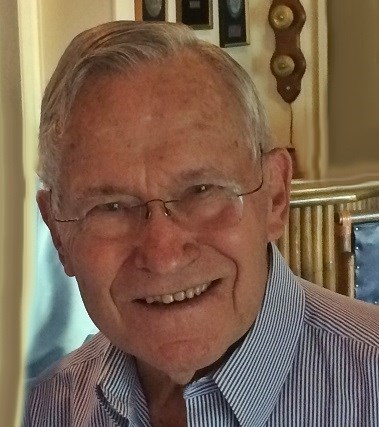 Harold “Hal” Neid Hampton passed away on Saturday, February 1 at St. David’s South Hospital in Austin. He is survived by his loving wife Barbara, son David, grandchildren Benjamin Hampton, Robert Hampton, and Katherine Hampton and great-grandsons Caleb Hampton and Brody Hampton. He is predeceased by his son Eric Neal Hampton. He grew up in Victoria and graduated from the University of Texas and University of Colorado. Harold was an ardent Longhorn fan. Harold was a career Air Force officer rising to the rank of Lt. Colonel and was awarded the Distinguished Flying Cross with one Oak Leaf Cluster, the Air Medal with 15 Oak Leaf clusters and the Air Force Commendation Medal. After 280 combat missions in Vietnam, he was chief of intelligence at Davis Monthan Air Base in Arizona. Then he led a military training program with the Chilean Air Force in Santiago, Chile. He retired after 24 years of service to his country. He also worked at the Texas State Employment Commission for 15 years and started a program to assist people in finding short-term employment, in addition to providing employment counseling. A memorial service will be held at Shepherd of the Hills Lutheran Church, Westlake Hills at 11:00 am., Saturday, February 8th. In lieu of flowers, memorials to Shepherd of the Hills Lutheran Church, Honor Flight Austin or Paralyzed Vets is preferred.
See more See Less

In Memory Of Harold "Hal" Hampton