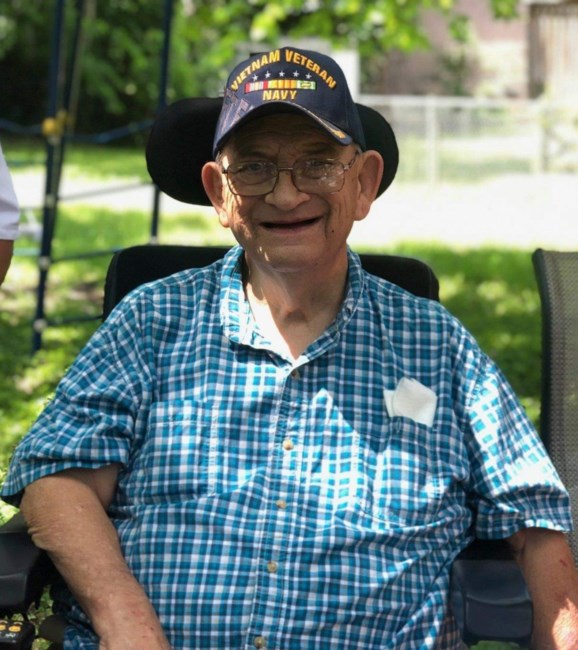 John David Folkes Sr. age 74 of Buda, Texas went to be with the Lord September 15, 2019 surrounded by his family. He was born on April 21, 1945 to Lola Beta and Rev. James Otis Folkes in Beeville, Texas. He was the youngest of six children. He graduated from Luling High School in 1963. He enlisted in the Navy on August 30, 1965 and served for six years, during those six years he fought in the Vietnam War. Shirley and David started dating November 9, 1963 during that time she became the love of his life and on August 1, 1970 he married her to spend the rest of their life together. He was a long haul and short haul truck driver for more than 25 years. He was a jack of all trades and worked at numerous other jobs during his lifetime. If he knew you, he loved you. If you visited his house twice, you were to make yourself at home. He loved Jesus, football, books, and telling jokes, but more than anything he loved his family. He had a strength like no other and taught his family to be just as strong. He is preceded in death by his grandparents; Adella and George Folkes and Katie and Joe Ray. His parents; Lola Beta and Rev. James Otis Folkes, His siblings; Betty Jo Folkes, Robert Folkes, and Carolyn Macaluso. He is survived by the love of his life, Shirley Folkes; his siblings, Elizabeth and husband Orman Gwynn of Robstown and Glenn Folkes of Georgetown. His children, Kimberley and husband Mike of Austin, Loree and fiancé Sean of Paige, John D. and fiancé Elizabeth of Spring. His grandchildren, John, Melissa and Calvin, Heather and Drew, Jack Jr. and Tori, Trevor, Paul, Christy and Treyler, David, Aubrey, and Zyra. Six great-grandchildren, as well as many nieces, nephews, and cousins. Visitation will be on Thursday, September 19, 2019 from 6:30 pm - 8:30 pm at Weed-Corley-Fish Funeral Home 2620 Congress Ave, Austin, TX 78704. Funeral Service will be on Friday, September 20, 2019 at 2:00 pm at Onion Creek Baptist Church 8214 East Riverside Dr, Austin, TX 78744. Graveside Service will follow at 4:00 pm at McNeil Cemetery on County Road 302, Luling, TX 78648 (Also known as McNeil Rd. The Cemetery is a short distance off FM 1322. It's 5 miles outside of Luling.)
See more See Less

In Memory Of John David Folkes