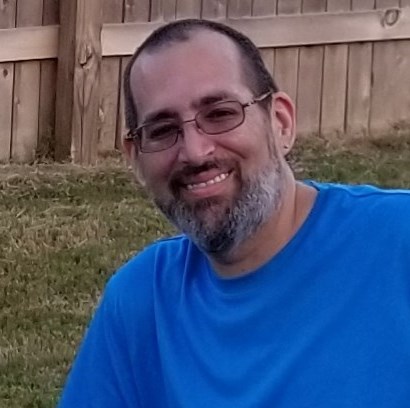 José “Niño” Levy, 47, passed away on Thursday, November 12, 2020, at his home in Austin, Texas, after a long battle with small bowel cancer. José was born on August 14, 1973, in Colorado Springs, Colorado, to Judith Kay Crowson and José Levy-Contreras. José graduated from Paul Laurence Dunbar High School Magnet Program in Fort Worth in 1991 and received a Bachelor of Science in Biology from Texas State University in 1996. Later, he received a Master of Arts in Health Psychology from Texas State University and completed clinical psychology courses at Fielding Graduate University. He was a board certified and licensed Behavior Analyst, and a licensed Psychological Associate. José began his career working with individuals with traumatic brain injuries at Tangram-Premier. Later in his career, he focused on working with individuals with intellectual and developmental disabilities (IDD) at the Austin State Supported Living Center (ASSLC), Positive Strategies, and Behavior Solutions, LLC, where he served as a director. He was also an adjunct professor for the Department of Psychology at Austin Community College. José served as a voice for those with IDD during his term as Vice-Chair on the Mayor’s Committee for People with Disabilities for the City of Austin and was a member of and presenter for the Association of Professional Behavior Analyst and the Texas Chapter of the American Association on Intellectual and Developmental Disabilities (aaidd). José loved hip-hop, traveling, scuba diving, mountains, and was an avid foodie who greatly appreciated homemade corn tortillas. José is survived by his wife of 24 years, Anitra; daughter, Aenea; brother, Jerold Levy (Zinnia); sister, Johanna Levy-Ortiz (Josh), aunt, Roma Marcum and many other beloved family members and friends. Preceding him in death were his parents, Judith Levy and José Levy-Contreras, and sister, Abbigail Levy. The family would like to thank the medical professionals and staff at the Austin Cancer Center, M.D. Anderson, Texas Oncology, Dell Medical School’s Livestrong Cancer Institutes, Paragon Healthcare, Halcyon Home Healthcare, and Hospice Austin. In lieu of flowers, contributions can be made in honor of José to the following of organizations; American Cancer Society, the Texas Chapter of aaidd, and Best Buddies International. Memorial Service 2:00 pm on Saturday, January 9, 2021 at Weed-Corley-Fish Funeral Home, 2620 South Congress. Currently, due to the substantial public risk, city and state government mandates that social gatherings of limited amounts may occur with strict social distancing protocol. Current COVID protocols for Travis County, guests must wear protective masks at all times while inside the funeral home facility and practice the recommended six foot social distancing. Weed-Corley-Fish South will limit our capacity to 70 guests at a service while enforcing all distancing and hygiene standards. We appreciate your understanding.
See more See Less

In Memory Of José "Niño" Levy