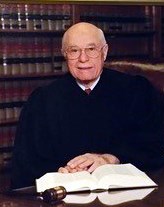 Judge Carl E.F. Dally was born January 22, 1924, in Denver, Colorado and grew up in rural Merino, Colorado, with his three siblings: Robert, Louise, and Bernice. He attended Colorado A&M, Michigan State University, and the University of Denver, where he earned his bachelor's degree in Economics. Carl is a veteran of both World War II and the Korean War. He served as a sergeant in the U.S. Army Air Corps a member of the 57th Bomb Wing from 1942 to 1945. He returned to military service as a captain in the U.S. Air Force from 1951 to 1953. Thanks to the G.I. Bill, he completed his J.D. at the University of Denver in 1949. He was stationed in College Station where he met the love of his life Edith Carr who was from Port Arthur. They married in 1952 and the happy couple moved to Houston. In February of 1953, they welcomed their only son William "Bill" Carl Dally into the world. In 1958, Carl was admitted to practice in front of the United States Supreme Court. While in Houston, Carl served as an assistant district attorney of Harris County from 1960 until 1966. After leaving the district attorney's office, he became a partner in the Houston law firm of Briscoe, Dally & Shaffer. He also lectured in criminal law at the South Texas College of Law. In 1971, Carl was appointed a commissioner of the Texas Court of Criminal Appeals. When Texas voters approved a constitutional amendment in 1977 to increase the Texas Court of Criminal Appeals from five to nine judges, Carl was one of two commissioners of the court who automatically became judges. He served on the Court of Criminal Appeals from 1978 until 1983. In Houston and Austin, Carl and Edith were active members of their churches serving as Sunday School teachers and Carl as a deacon, with church memberships at Second Baptist Church of Houston, Hyde Park Baptist Church, and Austin Baptist Church. Everyone who knew Carl knew how much he valued family. For many years, he spent every afternoon picking up his only granddaughter Laura Dally Stowe from Hyde Park Baptist School. He was there so often the teachers began including him in activities like helping to prepare students for the news bowl. Shortly after Carl fully retired from writing legal opinions in his mid-80's, he and Edith moved from their West Austin home to Querencia Retirement community where many of their friends like the late Judge and Mrs. Jack Onion also chose to reside. Sadly, Carl lost his best friend and love of his life, Edith in 2018. Despite the great loss, Carl remained the most loving and treasured family member at family events and enjoyed seeing his family during their frequent visits. He is preceded in death by his parents Emsley and Ethel Dally; brother Robert "Bob" Dally, and sisters Louise and Bernice. He is survived in death by his son William Carl Dally and daughter-in-law Cindy Laguna Dally; granddaughter Laura Dally Stowe and her husband Nathan Jay Stowe; and nephews Thomas Cook, David Williams, Robert and Paul Dally, and nieces Cathy Phipps, and Joann Thatcher. At the age of 98, Carl joined the love of his life Edith on October 19, 2022. It is with heavy hearts family and friends must say goodbye to such a gentlemen who lived his life in service of others. The family would like to extend our sincere thanks to Mary Thompson who was his personal caregiver and to Querencia staff members Robin Frair, Jonathan, Tamara and Julian. Special thanks to Dr. Raymond Edge officiating Pastor from First Baptist Church in Bastrop, Texas. Services will be held at Weed-Corley-Fish Funeral home, 2620 South Congress Avenue, Austin, Texas on Wednesday, October 26 at 1:00 pm, Interment at the Texas State Cemetery, Austin, Texas. In lieu of flowers memorials may be made to: Texas Baptist Children’s Home, 1101 N Mays, Round Rock, Texas (TBCH.org)
See more See Less