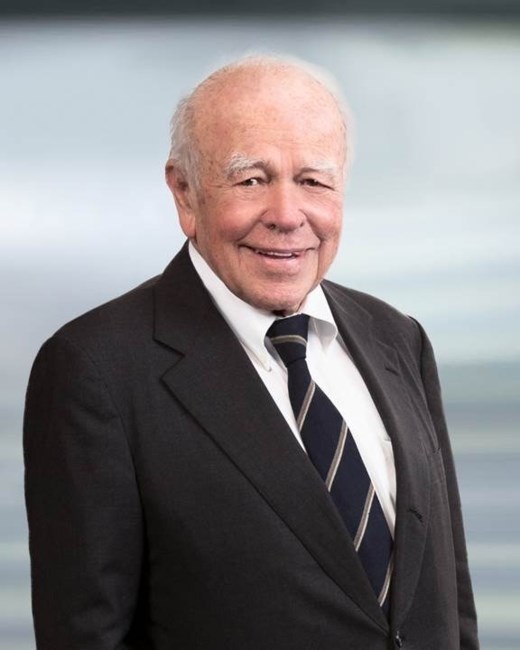 Lloyd Pampell Lochridge, Jr., 103, died on April 13, 2021 at his home in Austin, Texas. Lloyd was born on February 3, 1918 at the Seton Infirmary in Austin to the late Franklyn Blocker and Lloyd P. Lochridge. He grew up in Forest Hills, New York but was determined to return to Texas after spending summers visiting family in Austin, Galveston, and Wichita Falls. Lloyd stayed active and worked hard throughout his life beginning with his first job as a child selling newspapers from a wagon. He later became an Eagle Scout and as such served at FDR’s inauguration ceremony and parade. At 16, Lloyd enrolled at Princeton University (‘38) and played on the lightweight football team. He then continued on to Harvard Law School (‘41) where he joined the rugby team and took up sailing. While studying for the bar exam, he received a telephone call with the news of Pearl Harbor and soon after joined the Navy. While serving as a Lieutenant Commander during World War II, he met his wife of sixty-three years, Frances Potter, in Washington D.C. After a brief time in San Francisco, California, Lloyd and Frances moved to the Lower Rio Grande Valley in Texas. He began his law practice in a modest office above a grocery store in Mission. After many joyous years in the Valley, Lloyd and Frances relocated to Austin in 1959 when his childhood friend Robert McGinnis invited Lloyd to join the firm that would become McGinnis Lochridge. Over the years, Lloyd confounded many with his ability to be a tenacious advocate on behalf of his clients in the courtroom while always maintaining his gentlemanly character and sense of humor. Lloyd continued to go to the office in coat and tie daily until the COVID-19 pandemic in 2020. His strong belief in the importance of civility, ethics, and integrity guided his seventy-five years of practice and his service to the legal profession. Lloyd had a unique rapport with individuals from all walks of life through his work with numerous civic and professional organizations. This led to cherished friendships across generations. Lloyd maintained a weekly squash match with Chrys Doughterty well into their nineties. Those who knew Lloyd will undoubtedly remember moments of kindness, courage, graciousness, and courtliness. Lloyd is survived by his four children, Georgia Lochridge, Lloyd P. Lochridge, III, Hope Lochridge, and Frances Lochridge Perez and her husband, A. R., his grandchildren, Bonnie Galvin, Jenny Galvin, Will Leavitt, Ellie Lochridge, Patton Lochridge, Joe Lochridge, Lloyd Lochridge, and Molly Powers, his great-grandchildren, Rowan Meagher, Fiona Meagher, Sophia Leavitt, Liam Leavitt, Nora Lochridge, Anne Lochridge, Isabel Lochridge, Tomás Lochridge, Caya Lochridge, and Otto Lochridge, and daughter-in-law Candy Lochridge. Lloyd was preceded in death by his wife, Frances Potter Lochridge and his children, Anne Lochridge Leavitt and Patton Lochridge. The family expresses its thanks to the McGinnis Lochridge law firm, the Calvert and Lochridge Inns of Court, Town & Gown, and neighbors on Hillview Road for their support and thoughtfulness during his last years. A memorial service will be held for the family at The Episcopal Church of the Good Shepherd on Friday, April 23rd and accessible on Good Shepherd’s website for his friends and far-flung family. In lieu of flowers, please consider donating to the Austin Community Foundation or the Salvation Army Austin.
See more See Less