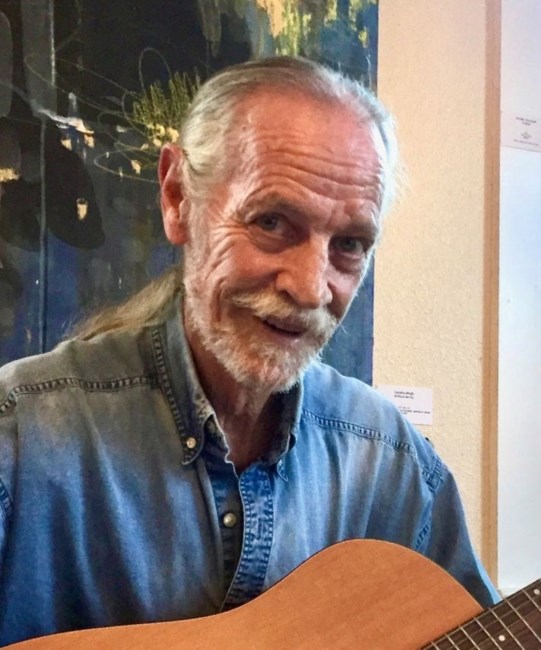 Riley Hickerson, June 27, 1954 – May 1, 2022, was the youngest of 8 children. He was born in Phillips, Texas, a company town. After moving around the oil patch, Riley and family settled down in Austin in 1961. Riley delivered the newspaper before school and sold donuts door to door after school. When he was old enough, he bagged groceries and flipped burgers at Mooreburger. He was popular at school and waterskied daily. He would swim out to the middle of the lake with his waterski and a life belt and stick his thumb out if there was no boat readily available. Riley attended UT briefly then fled to Europe and lived overseas from 1975 to 1993. He taught waterskiing in Sicily, Turkey and Greece. In 1977-78 he traveled overland through Turkey, Afghanistan, Iran and Pakistan to India where he met Indira Ghandi in her home. A convoluted trail led him to graduate with a BBA from John Cabot International University in Rome, Italy. He was in movies and toured, playing music (guitar, harmonica, and keyboard) then settled down with Terri Lynn Wright, the love of his life. Terri was the most successful ballerina Austin ever produced. Riley taught languages at the Berlitz Language Center and never stopped making music. After 27 years of that great challenge called marriage, Terri died December 10, 2020. Riley mourned Terri passionately, as he did all things in life, then left us suddenly after a lovely day with friends at a concert in Lago Vista. He was predeceased by his siblings Russell Hickerson, Lucretia Hickerson-Luc, and Cynthia Hickerson, and by his parents, Geraldine Clark and A.L. Hickerson. Riley is survived by his siblings CrazyCarl Hickerson; Melanie Hickerson; Helen Nelson and husband, Art; and Brooks Hickerson and wife, Peggy; plus many, many nieces, nephews, cousins, friends, and loved ones, all. In this life, Riley had a good time. He will be missed. Riley’s favorite causes were Austin City Ballet and Austin Pets Alive. Donations in his name would be a wonderful token of appreciation and memory. A memorial celebration for Riley will be announced later. Fond memories and expressions of sympathy may be shared at www.cookwaldenfuneralhome.com for the Hickerson family.
See more See Less

In Memory Of Riley Gerald Hickerson