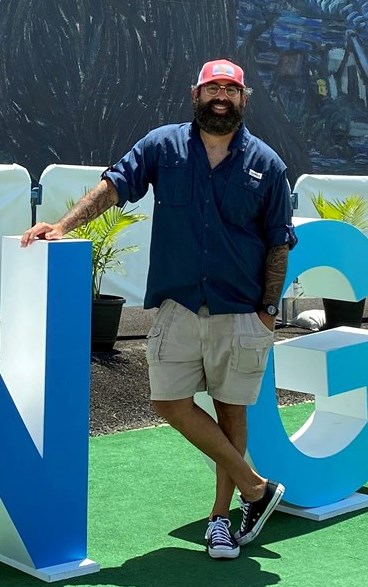 Rob Omar Cantu born December 31, 1974, in Austin, TX to Robert and Tranquilina Cantu passed away peacefully surrounded by loved ones on January 19, 2022 after a very sudden battle with cancer. Rob lived his life with the belief that everything happens for a reason, and he accepted his illness with courage and faith knowing that only God knows the plans for us. Rob knew God's loving promise in his life and felt called to tell anyone who needed to know it. He loved art in all forms and would spend as much time appreciating a street artist as he would with a famous piece in a museum. He spent his free time playing the guitar, writing music, drawing and was an avid photographer. He loved getting in the car and driving the countryside with the music blaring, just seeing where the roads took him. He wanted everyone around him to be happy and was known by many to walk into a room and instantly make everyone laugh. He leaves behind many memories for his family and friends to cherish. Rob graduated from James Bowie high school in 1993 and went on to obtain an associates degree in criminal justice. When he was young, he dreamed of being a police officer, but an illness required him to withdraw from the Austin Police Academy before he could realize this. His love for helping others eventually led him to a position with Ascension Hospitals and he took great joy in helping others when they needed it most. Anyone who knew Rob knew that his greatest pride and joy in life was being a father to his beautiful daughter Jamie, who from the moment she was born would always be his number one priority. He was completely happy to follow her wherever life took them. He is preceded in death by his paternal grandparents Gregorio Cantu and Raquel Zambrano Cantu and maternal grandparents Roberto Martinez and Josefa Gamez Martinez. Rob is survived by his loving parents Robert and Lina Cantu, brother Michael Cantu, sister-in-law Gina Richardson-Cantu, daughter Jamie Lauren Cantu, partner Vanessa Thompson and many aunts, uncles, and cousins. We have all benefited from the peace and love he had from knowing God in his life and will miss him greatly. Roberto will be laid to rest in Cook-Walden/Forest Oaks Memorial Park, 6300 W William Cannon Dr, Austin, TX 78749-1811. Fond memories and expressions of sympathy may be shared at www.cookwaldenforestoaks.com for the Cantu family.
See more See Less

In Memory Of Roberto Omar Cantu