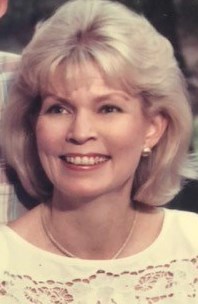 Ruth Elizabeth Huey, loving mother and grandmother, passed away on October 22, 2018 in Austin, Texas. Mom was beautiful, inside and out, and gave of herself to everyone she met. She is survived by her two children, Laura Elizabeth Pollard of Austin and David Bradley Pollard of Cypress, Texas. She also leaves behind her loving daughter-in-law, Dallas Kaye Pollard, Laura’s life partner, Roger Lee and three beautiful grandchildren Blake Miller Pollard, Emersen Kaye Pollard, and Hudson Bradley Pollard. Ruth was the daughter of Emmitt Bickley Day and Olene Walden Day. Born in Houston, Ruth attended Lamar High School before attending the University of Texas at Austin. She loved the University and leaving home to attend UT. Her experiences as a college student included membership in Delta Delta Delta sorority, Bluebonnet Belles, and being voted one of the top 10 most beautiful at the University of Texas. Ruth met her future husband and married after graduating with a degree in Education in 1962. Together they moved to Dallas for a few years before coming back to Austin to work and raise a family. She began teaching elementary school in south Austin before having her two children and becoming a stay at home mom. After divorcing her husband in 1979, Ruth went to work at City National Bank in Austin. She worked for her longtime friend and boss, T. Jones who challenged her to take on increased responsibilities that included Great Expectations and a role as officer of the bank. During that time, Ruth met the love of her life, Robert (Bob) Miller Huey. The courtship of Ruth was unconventional to say the least. Bob was a customer of the bank and noticed on a visit that she was suffering from the flu. He knew that taking time off to rest was outweighed with her need to work. While Ruth was on a break, he called in a favor to a physician and had a prescription waiting for her on her desk when she returned. It meant the world to her and began a love that would result in marriage in 1983. That time of life was the happiest for her. She was in love with someone that loved her amazingly. Their family grew to include her two children and his four children. They loved travel, being together at the ranch near Lampasas, and entertaining with their many friends. Their time together was what a marriage should be and how two people should love one another. Their marriage would only last 3 years as Bob fought cancer and left her side in 1986. Whether it was 3 years or 30 years, their marriage was complete. She loved for a lifetime in those 3 years and carried that on for the rest of her life. It was after Bob’s death that Ruth and her daughter Laura began to travel and enjoy time together. Laura developed an illness and Ruth made sure to spend as much time enjoying the sights of Boston and other wonderful cities together. They had so many incredible times together and became each other’s best friend. Nothing may have been as exciting to her as becoming “Grammy”. She so loved her grandson Blake and cherished her times with him and the family in Cypress and Austin. Her funny costumes and dressing up for Halloween with Blake was just part of who she enjoyed being. Her love for family and being at his games was so special. Ruth began to suffer from medical issues that challenged her and her ability to be there as much when the twins, Emersen and Hudson came along in 2005. She would be so proud of them and the people they are growing up to be. Ruth’s outside beauty was taken away from her as her illness progressed. None of that mattered as her spirit was beautiful and her humor stayed with her until the end. Even though communication was difficult, she loved her son’s visits and hearing about her grandchildren and looking at pictures of their events and fun things they were doing. She will be remembered as someone that loved to laugh and give of herself, dress to the nines including making a Mexican dress look like a million bucks, traveling with friends and family, and loving her grandchildren. There will be a ceremony honoring her on Saturday, October 27 at 1pm at Cook-Walden Chapel of the Hills Funeral Home at 9700 Anderson Mill Rd., Austin, Texas 78750 with gravesite services to follow at Austin Memorial Park, 2800 Hancock Dr., Austin, Texas. Fond memories and expressions of sympathy may be shared at www.cookwakdenchapelofthehills.com for the Huey family.
See more See Less

In Memory Of Ruth Elizabeth Huey