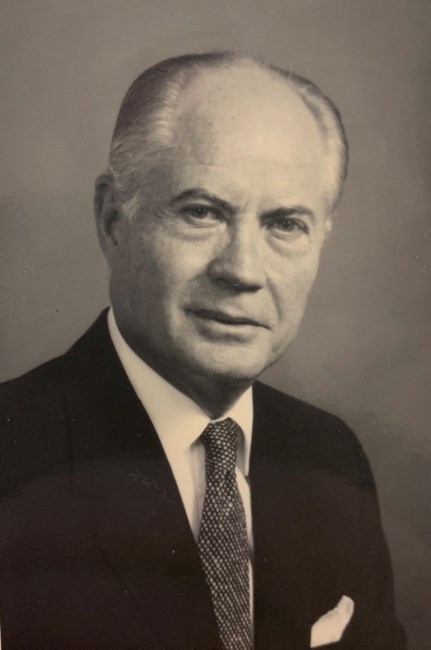 Sam Winters was born as John Samuel Winters in Amarillo, Texas on July 7, 1922. His parents were Guydelle Vineyard Winters and John Howard Winters – both from pioneer Texas families. He is predeceased by his wife of 65 years, Dorothy R. Winters, daughter Jane Rushing Winters and grandson, Walter Max Mischer, III. He is survived by his daughter, Leila Mischer, son-in-law, Walter Mischer, Jr., granddaughter, Lawson Mischer, granddaughter, Morgan Mischer Warth and husband Lucas Warth, and great grandson, Tate Warth, Max’s wife, Sarah Mischer, mother of great granddaughters Molly Mischer and Mary Campbell Mischer. He attended the public schools of Amarillo and Amarillo College where he was selected as a Distinguished Alumnus in 1996. He attended The University of Texas at Austin where he was selected as an Outstanding Student in 1944. He was active on campus as a member of Silver Spurs and President of Phi Alpha Delta legal fraternity. He received B.A. and J.D. degrees in 1944 and 1948 respectively. He was a member of the Naval ROTC and received a commission as an Ensign in the Navy upon graduation in February 1944. During World War II, he served in the Asiatic Pacific campaign aboard a destroyer, the USS Isherwood (DDS520), at the invasion of the Philippine Islands at Leyte Gulf, Lingayen Gulf and Subic Bay as well as the invasion of Okinawa where the ship, while serving as a radar picket ship, was badly damaged by a Japanese suicide plane with many lives lost. He was honored with two Philippine Liberation battle stars and four Asiatic Pacific battle stars. Mr. Winters was a named partner of the distinguished Austin law firm Clark, Thomas & Winters and served as President of the Travis County Bar Association (now the Austin Bar Association). During his career, Mr. Winters served his community and profession in many capacities. He was chair of the Texas Research League; member of the board of directors of First Interstate Bank-Texas (now Wells Fargo); chair of the board of National Bank of Commerce; a founder of Campfire USA Balcones Council; member of the American Law Institute; chair of the Public Utility Communication and Transportation Section of the American Bar Association; Fellow of the American Bar Foundation; Charter Member and Life Fellow of the Philosophical Society of Texas; Fleet Admiral of Austin Admirals Club; Senior Warden of the Episcopal Church of the Good Shepherd-Austin; and, member of the Executive Board of the Episcopal Diocese of Texas and chair of its Finance Department; member, board of Junior Achievement; member Panhandle Plains Historical Society. In 1967 he was appointed a member of the original National Highway Safety Advisory Committee by President Lyndon B. Johnson where he acted as chair and in 1991 was appointed to the Board of Governors of the United States Postal Service by President George H. W. Bush where he served for nine years and served as chair for three years. He was a former member of the Federal Judicial Evaluation Committee. He was a life member of the University of Texas Development Board and was chosen as a member of the Hall of Fame by the University of Texas Silver Spurs. Mr. Winters was honored with the Raymond Mauk Leadership Award by the Insurance Council of Texas for significant contributions to the Texas Property and Casualty Insurance Industry. He was also honored with the Award of Distinguished Merit by the Texas Association of Life and Health Insurers for his contributions to the life and health insurance industry. He was a member of the Public Utility Commission at Texas (PUCAT) (currently the Infrastructure and Regulated Industries Section of the Public Utility Commission). Sam Winters was a devoted husband, father, grandfather and great grandfather. He had many valued friends and colleagues. His family depended on him as a solid and enduring source of comfort. His friends and family will always remember his smile and laughter. The family would like to recognize the numerous people who have given him assistance in every aspect of his life. Our deepest gratitude to the family’s long time friend, Kay Brumley, who has been a dear friend and constant companion of Sam; special thanks to Dottie Mathews, Mr. Winters’ executive assistant for many years, and Patti O’Meara and the entire staff of Personal Administrators. In particular, the family expresses their appreciation for the unwavering dedication and service that Rebecca and Alan Hedges and their family members have given Mr. Winters over the years. We are extremely grateful to Jennifer Myers for her incredible friendship as well as her nursing care. He lived life to the fullest. He will be missed. A Memorial Service will be held at the Episcopal Church of the Good Shepherd, 3201 Windsor Rd., Austin, TX, 78703 on Tuesday, September 3, 2019 at 2:00 p.m., with a reception following at Tarry House, 3006 Bowman Ave., Austin, TX 78703. In celebration of Sam’s life, bright colored attire is welcome. Honorary Pallbearers: Harry Whittington, Ford Smith, Wally Lowenbaum, Walt Mischer, Charles Tate, Mike Reynolds, Theo Painter, John Patton, Roger Joseph, Walter Demond, Ben Brollier, Chuck Christensen, Lucas Warth, Oliver Fackelmayer. In lieu of flowers a memorial contribution can be made to the Jane Rushing Winters Scholarship fund at St. Andrew’s Episcopal School, of Austin, or The Episcopal Church of the Good Shepherd.
See more See Less

In Memory Of Sam Winters