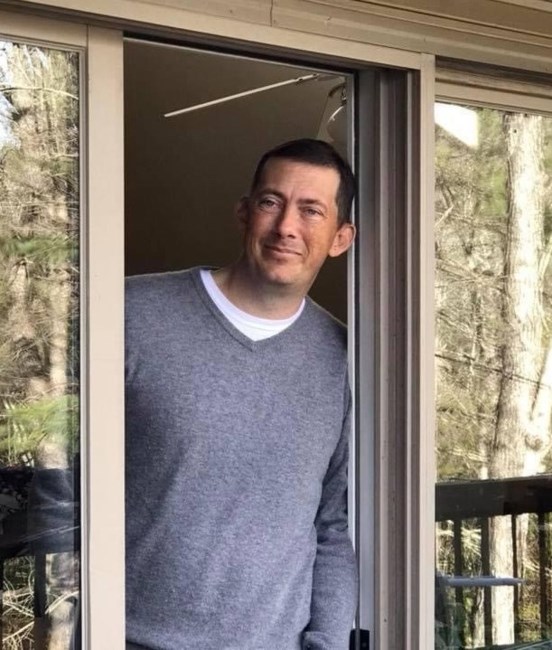 Sean Michael Crowley, devoted family man, amateur swim meet MC, and oft disappointed Cowboys fan, passed away peacefully on August 19th, surrounded by loved ones. Sean was born in Austin on October 25, 1977 to Michael Crowley, an Austin attorney, and Nancy Rude Crowley, joining his big sister Lisa. After Nancy passed away in 1981, Mike married Beryl (Berry) Crowley, another Austin attorney, in 1984 and Sean gained more sisters: Pamela, Jessica and Leslie. Sean loved taking epic road trips with his dad, including one where they visited various baseball stadiums in the east, before Mike passed away in 2000. Sean was a lifelong resident of Austin and attended high school at St. Michael’s Catholic Academy, lettering in multiple sports, and graduated from St. Edward’s University in 2001. Following in his father’s footsteps, Sean graduated from Texas Tech Law School in 2008. For the last 11 years, he was a successful attorney, partner, and mentor at Thompson Coe in Austin Texas, who was respected by his colleagues, clients, and all that encountered him. Sean’s most important passion in life was his family. Sean met the love of his life, Alicia (Ali), yet another Austin attorney, in 2002, and embarked on a journey that brought him his children Ireland, Michael and Collin. He was a patient man to put up with all the craziness that his wife and three children brought to him. Sean loved being a Dad and was always there for his kids. He attended their games without fail if they had their uniform on, regardless of how much playtime they got. He got involved in the kid’s activities in other ways, such as helping with school work, coaching girls soccer and boys flag football, and even making a name for himself as a color commentator for Travis Country Swim Meets. Even when Sean’s kids were not swimming, he kept showing up and having a great time on the mic, making kids and adults laugh while keeping the meet moving along smoothly. In addition to being a husband and father, he was a devoted son, brother, uncle, cousin, and friend. He considered himself very close with his Mom, Berry, and his sisters. As the younger brother of four sisters, he showed up for whatever was needed with his infectious sense of humor and unfailing optimism. Sean’s extended family was scattered across the country, so when the Crowley family got together for various weddings, Sean would gather up all the cousins and lead the night’s excursions. These tended to end in the wee hours of the morning and after numerous bad decisions were made. Just the way Sean liked it. Sean was also always ready to do a silly sketch at the yearly Evans family Reunion. Those who saw the CHICAGO 2004 routine say that it’s forever burned in their memory, for better or for worse. There will be a private burial at this time. When it is safe to gather again, there will be a Memorial Celebration of Sean and his life. There will be a brief obituary republished when the Celebration is scheduled. In lieu of flowers, the family asks friends to consider a donation to the educational fund for Sean's children, or the charity of your choice. Checks should be made payable to: Thompson Coe, Trustee for the Crowley Children‘s Education Fund and mailed to Attention Mike Jones, 701 Brazos, Suite 1500, Austin, Texas 78701. For more information, please email info@thompsoncoe.com.
See more See Less

In Memory Of Sean Michael Crowley