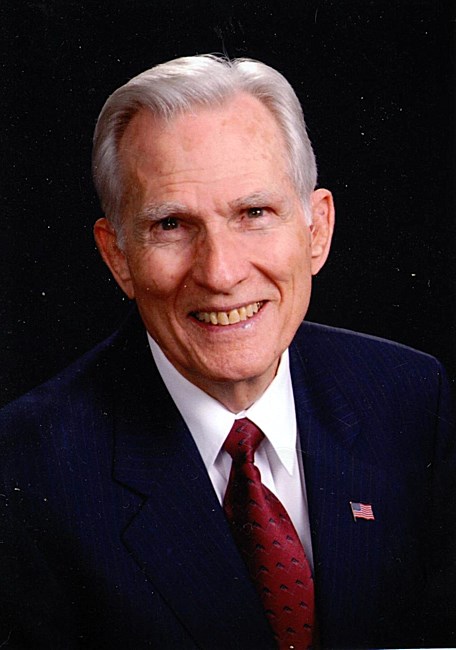 T. F. “Felix” Dailey, Jr., born September 1, 1928, in Crockett, Texas, peacefully left this earth and stepped into the loving arms of Jesus Christ, his Savior and Lord, on January 14, 2022, at the age of 93. He was a humble, committed Christ-follower and influenced others to know Jesus by his words, his life, and throughout fifty-five years of serving at Allandale/Great Hills Baptist church as a deacon, teacher and discipler, director of Young Adult ministry and men’s retreat speaker. He lived to serve and bring honor to Jesus and encouraged those he knew to do the same. The youngest of 8 children and a 5th generation native Texan, Felix grew up and worked on his family’s farm in east Texas. From 1946 to 1950, he attended Texas A&M University – Gig ‘em Aggies! - earning a B.S. in Petroleum Engineering. During the Korean War, he served as a 1st Lieutenant in the US Army from 1951 to 1953. He then began his career as a drilling rig roughneck progressing quickly to becoming a consulting petroleum engineer until 1967. From then until 2002, he owned and operated Felix Dailey Tire Company in Austin, Texas. The Texas Railroad Commission employed him as Director of Field Operations, Oil and Gas Division, from 1982 until 1993. Felix was preceded in death by his parents, Thomas Franklin and Elizabeth Nell “Bess” Dailey, his siblings, Charles Thomas, Liston Dwight “Pete”, John Hill “Jack”, Mary Ellen, James Kent “Mike”, Iva Tom, Dan David, and his first two wives, Joy Ann (Hoherd) Dailey and Frances Lou (Ivey) Dailey. He is survived by his wife, Kathleen Elaine Dailey; his children Linda Beth Dailey Deetjen (Alan), David Thomas Dailey (Donna), Michael John Dailey; his grandchildren, Leah (Deetjen) Faszholz, Rebecca (Deetjen) Arender, Thomas Deetjen, Todd Deetjen, Jonathan Dailey, Laura Dailey, Suzanne (Dailey) Callaway, Castalia Vidaurri; and his fourteen great-grandchildren - Elliott, Judah, Ivey, Sawyer, Georgia, Micah, Hamilton, Eden, Beatrice, Henry, Junia, Luke, Liam, Layla. Acts 4:12 was one of Felix’s favorite Bible verses, speaking of Jesus, “Neither is there salvation in any other; for there is no other name under heaven given among men, whereby we must be saved.” Also, Zechariah 4:6, “Not might nor by power, but by my Spirit, says the Lord of hosts.” A memorial service for Felix will be held Saturday, April 2, 2022 at 1:30 PM at Great Hills Baptist Church, 10500 Jollyville Rd., Austin, Texas 78759. Fond memories and expressions of sympathy for the Dailey family may be shared at https://tinyurl.com/tfd-obit
See more See Less