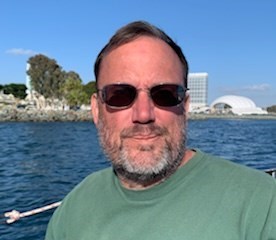 Thomas Jackson Linscomb of Austin, Texas, passed away on January 18, 2022. He was born on January 17, 1961 at Kadena Air Force Base, Okinawa, to Lt Colonel Horace and Alice Marie Linscomb (nee Sternnadle). Thomas was a "military brat" experiencing growing up on Okinawa, Germany, and in the States. He was a fierce competitor in the Texas UIL “slide rule” competitions before graduating from Del Valle High School across from the old Bergstrom Air Force Base. He attended The University of Texas at Austin and worked at the Advanced Graphics Lab while a student. Upon graduating in 1982 with a Bachelor of Science in Mechanical Engineering, Thomas continued working at UT at the Computation Center, retiring in 2014 after more than 30 years. With aviation in his blood, he earned his private pilot license and enjoyed flying, attending air shows, and building an F-1 Rocket experimental aircraft. Thomas met his future wife, Jennifer Cole, in 1994 at the Computation Center. He proposed to Jennifer in a Piper Cherokee flying over her hometown. They married in 1998 and have two beautiful children: 12 year old Brandon Chase and 11 year old Jake Austin. After retirement, Thomas identified himself as a stay-at-home dad and enjoyed his son’s baseball games, soccer, and Boy Scouts activities. In addition to Jennifer, Brandon and Jake, his survivors include his 94 year old father, Horace G Linscomb, sisters Lizabeth Hancock (Mark) of Magnolia and Licia Braune of Fort Worth, along with numerous aunts, uncles, nieces and nephews. A visitation will be held on Thursday, January 27 at Cook-Walden/Forest Oaks Funeral Home and Memorial Park in Austin, Texas at 6300 William Cannon Dr, Austin, TX 78748 from 6:00 – 8:00 PM. In lieu of flowers, donations may be made to KUT, the Experimental Aviation Association (EAA) or the Boy Scouts of America Troop 70 of Austin.
See more See Less

In Memory Of Thomas Jackson Linscomb