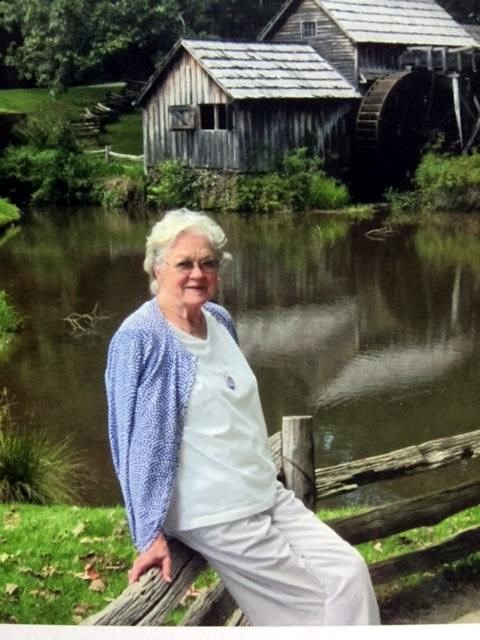 Elsie Hancock Wright, born December 10, 1923, passed peacefully at her home in Bassett on September 8, 2017. She was predeceased by her husband , Robert Milfred Wright. She was also predeceased by her parents, Nannie Lou and William Henry Hancock of Bassett, her sisters Lillian Garst and Myrtle Plybon and brother Hersel Hancock, all of Salem, VA, and her son-in-law Joseph She is survived by her three children: Darlene Wright Van Dyke of Blowing Rock, NC, Belinda W. Scanlon (and husband Jamie) of Westport, CT and Robert M. Wright, Jr. of Scottsdale, AZ. Affectionately called "Ace" by her beloved grandchildren, they include Joseph K. Josh Van Dyke (and wife Barbara and family) of Charlotte, NC, Darren K. Van Dyke (and wife Angie and family) of Raleigh, NC, Siri Scanlon Appel (and husband Alex) of New York City and Emma R. Scanlon of Arlington, VA. She was also blessed with 5 great-grandchildren: Gray and Hayden Van Dyke of Charlotte, NC and Taylor, Hampton and Hudson Van Dyke of Raleigh, NC. She is also survived by her brother, Edward G. Hancock, formerly of Collinsville and her sister, Thelma Plaster of Salem, VA and many nieces, nephews and cousins. Elsie grew up in Bassett and married Bob, her high school sweetheart, in 1941. After he became an officer and pilot in the U.S. Army Air Forces during WW II, they traveled extensively and lived in multiple parts of the country. During their time in California, New York and Florida, Elsie had an active modeling career. Her work for Kodak, Chevrolet and Buick appeared in their national advertising campaigns. She enjoyed her small parts as extras in movies as well as modeling in resort and designer fashion shows. She and Bob returned to Bassett in 1947, where they made their home and raised their children. Elsie was actively involved in their church, Pocahontas Baptist, serving in different capacities for Sunday School, various Ladies Committees, the Youth choir, and GA's. She was also a lifelong member of the Garden Gate Garden Club, serving as an Officer many times through the years. She was an avid horticulturist and won multiple ribbons for her flower arrangements in various judged flower shows. A devoted mother to her children, she was always involved in their many activities, their friends and their pets. Elsie and Bob hosted several class homecoming float building projects as well as sledding parties, drop-ins and group picnics. She was a constant volunteer at their schools, the PTA and the Booster Clubs. Elsie also loved taking family, landscape and nature photographs, shell hunting at the beach, ballroom dancing and flying with her husband in their small planes. During the entirety of her marriage to Bob, Friday was always date night for the two of them--no children allowed. It seems only fitting that she would join him again this past Friday. Her family is very happy they are finally reunited. Words cannot begin to express her family's gratitude to her loyal companion and caregiver for the last 4 years, Sandra Hairston, who brought sunshine into her life everyday. The family also thanks her niece Melody Ingram and Melissa Roland for their very kind care, Mountain Valley Hospice, especially Amy Pendleton and Pamela Roark, as well as the numerous people who supported her with kindness and prayers.
See more See Less

In Memory Of Elsie Hancock Wright