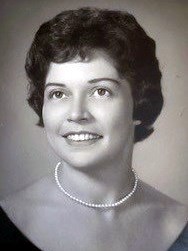 Aris Ann Oliver passed away on the evening of Sunday, August 14, 2022, at The Claiborne at Baton Rouge where she had been a resident since 2019. Aris was born on April 26,1936, in Pine Grove, Louisiana; she was the first and only child of Perry Calvin Oliver and Frances Ruth George Oliver. Her early childhood was forever impacted by the tragic loss of her father. She was reared by her mother in Pine Grove, where she lived until graduating from Pine Grove High School in 1954. She then attended Southeastern Louisiana College and earned her Bachelor’s Degree some three years later. Aris’ first job was with the State of Louisiana as a welfare worker in Covington, Louisiana. That job did not last long as Aris found her true vocation home with the Family Court in East Baton Rouge Parish where she held many and varied positions until her retirement. However, she took leave from Family Court to study at Tulane University where she obtained a Master of Social Work Degree. In 1972 Aris became a Louisiana State Board Certified Social Worker. Aris will be remembered for her Amite River camp, the crawfish boils, fish frys, her St. Patrick Day brunches, and just the fun times. She loved to cook, eat Cajun food, play Bunko and entertain family and friends. She traveled a lot, especially with her mother to whom she was most devoted. Aris was preceded in death by her parents and her beloved canine companion, Cece. She is survived by her first cousins; Iris George Bowles, Ira Steve George, Joseph Howes (Mary Jo), Lawrence “Val” George (Anna), Carol Ann Howes Porter (Jim), Shirley George Forsha, Carolyn E. George (Sara), William C. George, Barbara George Pearson, Betty George Raymond (Bob), and Thomas B. Stanley (Carol). Services will be at Rabenhorst Funeral Home, 825 Government Street on Friday, August 26, 2022 with visitation at 10:00 am, services at 11:00 am and burial to follow at Roselawn Memorial Park.
See more See Less

In Memory Of Aris Ann Oliver