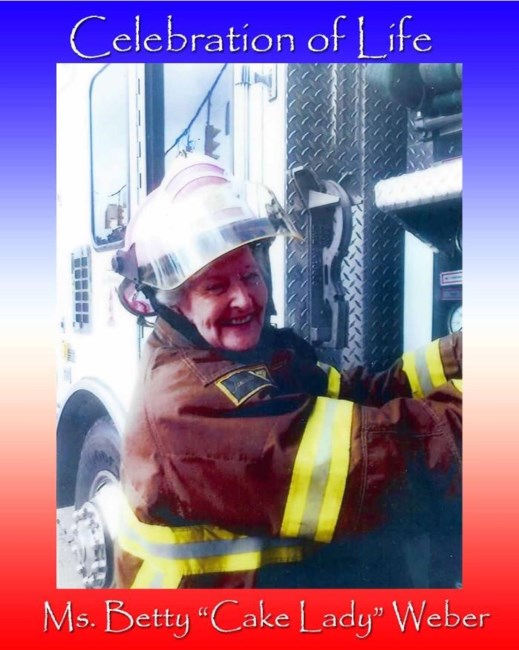 Betty Jo Bowman Breland (Betty Weber) She was 83, a native of Natchez, MS and a resident of Baton Rouge. She was a graduate of Baton Rouge High School. She passed away on July 8, 2019. She is survived by her son and daughter in law Donnie Breland and Linda Breland of Walker a daughter, Marcy Breland Kleinpeter of Missoula, Montana, a Brother, Donald Bowman of Clayton, North Carolina along with grandchildren and numerous nieces and nephews. Preceded in death by her Husband, D.L. "Larry" Breland Jr, and her second Husband Milton "Buck" Weber, her Parents, William L. Bowman and Jodie Walters Bowman, a Brother William F. Bowman and Sister, Ethel Stevens. Known as "Miss Betty, The Cake Lady", she was active in her "Baking Ministry" in support and prayer of our Firefighters, and held a special bond with the Firefighters of East Baton Rouge Parish. She frequented Fire Stations everywhere in the Greater Baton Rouge Area, bringing Cakes, Cookies, Muffins and other Baked Goods and passing out Prayer Cards to her Firefighters. Firefighters were family to her and she was frequently seen at Fire Department functions, including Academy Graduations and was regularly invited to dinner by the shifts at various Fire Stations. Her regular quote was, "I love my Firefighters and Pray for them daily". She knew them by name, along with many of their Wives and Children. She had been featured twice on WAFB TV's "Hand it On" program with Greg Meriwether for her Baking Ministry and volunteer work at The Food Bank, as well as a segment on WBRZ with Sylvia Witherspoon. Her proudest Moment was when she was named an "Honorary Fire Chief" and presented with a beautiful pink Fire Helmet, which she cherished above all possessions and displayed at home. She would also frequently approach Law Enforcement Officers and Military Service personnel that she saw in public, thanking them for their service and handing them Special Prayer Cards. She was a Computer and Key Punch Operator in the 60's and 70's and later drove a School Bus for the East Baton Rouge Parish School Board. Visitation will be held at Greenoaks Funeral Home on Wednesday, July 17, 2019 from 4:30PM-8:00PM. Services will be held at Greenoaks Funeral Home, Officiated by Fire Chaplain Mark Miles, on Thursday, July 18, 2019 at 12:00PM with visitation beginning at 9:00AM. Burial will follow at Greenoaks Memorial Park. The Family requests that in lieu of flowers, donations be made to the Baton Rouge Fire Department "Fire Prevention Committee" 8011 Merle Gustafson Dr., Baton Rouge, LA 70807, 225-354-1400.
See more See Less

In Memory Of Betty B Weber