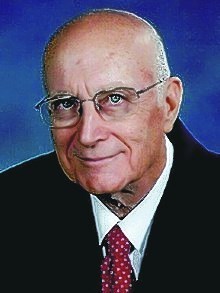 Charles A. Schutte, Sr., a beloved Husband, Father, Grandfather and Great Grandfather, was born on February 14, 1930 and passed away on September 20, 2021 at the age of 91. Charles was the son of Richard P. Schutte and Jennie Brechtel Schutte and a native of Algiers, LA. He was preceded in death by his parents, and by a daughter, Catherine Marie Schutte, a son Richard P. Schutte and a great granddaughter Kathryn Rebecca Schutte. He is survived by his loving wife of 69 years Lorraine Schutte, and six children, an adopted son and spouses - Charles A. Schutte, Jr and Jeannine, Dr Michael J. Schutte and Mary Jo, Dr. John P. Schutte and Mary, Joan S. McAuliffe, Dr. Robert J. Schutte and Micheline, Mary Anne S. Toledano and Chuck, his adopted son, Michael, a sister, Mary S. Reilly of Bethesda, Maryland and 14 grandchildren, and 6 great grandchildren. When his daughter Catherine died, he and Lorraine adopted and raised one of her children, Michael Schutte. Charles graduated from St. Aloysius High School in New Orleans in 1947. In 1951 he received a BS Degree in Business Administration from Southwestern Louisiana Institute (now the University of Louisiana at Lafayette). He was selected in his Junior Year to be a member of the Blue Key National Honor Society, and in his Senior Year was elected Student Body Vice President. While in College, he met his beloved wife Rita Lorraine Mouton of Lafayette. On November 22 of 1951 they were married at St. John the Evangelist Cathedral in Lafayette. He started working for Gulf Refining Company's Production Division in Triumph, LA. In 1951. In 1955 the Hardware Mutual Companies (now Sentry Insurance Group) in their New Orleans Office hired him as a Field Adjuster. When his training period ended, he was transferred to Lafayette, LA as the Field Adjuster for Southwest Louisiana. In 1987, he was promoted to Claims Examiner and transferred to the Middle South District Office in New Orleans. He was later promoted to the Chief Adjuster, and then Claims Manager for the Middle South District. He managed all Claims activities in the States of Arkansas, Louisiana and Mississippi. Later the Western third of Tennessee was added to his District. During the time he was District Manager, he was active in various Insurance Industry organizations. He was a member of the New Orleans Claims Managers Council and served a one-year term as President. He was on the Board of the Louisiana Insurance Guaranty Association for several years as the Representative of the Mutual Alliance. He was on the intercompany Arbitration Panel for several years. He was also on the Special Arbitration Committee. He served as Chairman for the Special Arbitration Committee for two years. He also taught IIA Courses on Property and Casualty Insurance for three years. He went with Avondale Shipyards for a short period of time and worked as the Asst. Insurance Manager. He was approached by an Executive of the Audubon Insurance Group, an AIG Company, and accepted an offer from this Group. He managed the Audubon's Metairie/New Orleans Office for two years and was promoted and transferred to Baton Rouge. He managed the Louisiana Insurance Guaranty Claims Service and Processing Unit for the Audubon. He was promoted to Vice President of Claims and remained in that position until he was ready to retire in 1997. He served on the Board of Directors of two of the Audubon Group Companies After his retirement he worked a short time as an Independent Adjuster. When the Company was sold he decided to open up his own operation and did this for 8 more years. He also worked as an Insurance Consultant and was qualified as an expert on claims handling procedures and insurance coverage Issues. At age 78 he decided that he had worked long enough, had driven enough miles, and closed up shop and really retired. He was always active in his Parish Church activities. He took courses and was qualified to teach CCD courses. He taught CCD Courses at St. Christopher, was instrumental in setting up the CCD program at the new Parish of St. Edward the Confessor in Metairie, and taught some of the courses there. When he transferred to Baton Rouge in 1985 he became a member of St. Aloysius Parish, and eventually became involved in two of the Church Ministries, and other Church related activities. He enjoyed the outdoors and the time he spent hunting, fishing and being in the woods and on the water. His time in the outdoors with his children was a special treat. He enjoyed cooking on the weekends and relaxing at home with his wife and children. He was also a vegetable gardener, and loved to work in the garden. He continued to have a small garden even though he was advancing in years. Of all the things he did in his later years, he loved most the time he spent with his wife, children, grandchildren, and great grandchildren on special occasions and holidays. In lieu of Flowers, he requested Masses, Prayers and works of Charity. Visitation will be held at St Aloysius Catholic Church, 2025 Stuart Ave Baton Rouge, LA. Saturday, September 25, 2021 from 9:00 am until the Mass of Christian Burial at 10:30 am. The pallbearers will be his grandsons, Andrew, Ryan, Stephen, Nicholas, and Michael Schutte, and Justin McAuliffe. Graveside service will take place at Holy Mary Mother of God Cemetery 3096 Johnston St, Lafayette, LA 70506 at 1:00 pm following the church services.

In Memory Of Charles Anthony Schutte