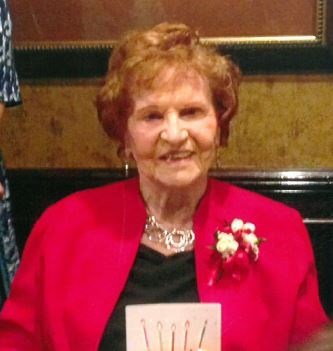 Estelle Blackledge Futrell Baxter (Stella) died on October 3, 2021. A resident of Baton Rouge since 1942, Stella was born May 13, 1923, in Stringer, MS and grew up in Canton, MS. She served her country during WWII in the U.S. Navy. She worked many years for the LA Division of Employment Security. She was a long-time member of Florida Blvd. Baptist Church. Stella is survived by her husband of 31 years, Henry (Hank) Baxter. She is also survived by her children Gayle, Kathy, Becky, and Mike, and was pre-deceased by her daughter Janet. Stella had 11 grandchildren, 17 great-grandchildren, and 14 great-great-grandchildren. She enjoyed time with family, traveling, and dancing. A loving mother, grandmother, and friend, she will be greatly missed. Visitation will be at Green Oaks Funeral Home, 9595 Florida Blvd., Baton Rouge, on Sunday, October 10, 4-7pm, and also on Monday, October 11, at 11am, with funeral at 12:00pm.

In Memory Of Estelle Baxter