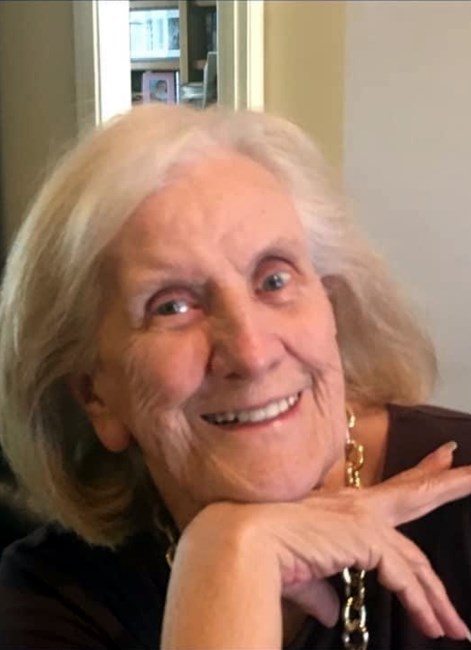 Gloria Stuart Butcher, 87, of Baton Rouge, passed away on Mother’s Day, May 8, 2022, surrounded by her husband and their seven children. She was born the 3rd of four children on March 26, 1935, in Sunbury-on-Thames, a suburb of London, England. She met the love of her life, Daniel “Boonie” Butcher, in 1954 while he was stationed in England at RAF Greenham Common Air Force Base during the Korean War. Gloria and Dan were paired as Maid of Honor and Best Man for a wedding of mutual friends. As Gloria saw Dan for the first time, she pointed to him and said, “You’re mine”. And he was. For the next 68 years. Her children were her greatest joy and greatest source of pride. After five daughters in a row, she bore twin sons. She said, “when they start coming in two’s, it’s time to quit!”. Gloria was always known to be a place of refuge and understanding for all her children’s friends….and their friends….and their friends. If the porch light was on, a kettle was boiling, tea was steeping, and a warm smile and an open heart was waiting. Many young lives were influenced and improved by conversations around the dining table on Cora Drive. Gloria is survived by her adoring husband, Dan; her five daughters, Debbie (Patrick) England of Chattanooga, TN; Jan (John) Postava of Winter Springs, FL; Danette (Dwight) Pugh of Shreveport, LA; Sharon (Damian) Greenwood of Lago Vista, TX; and Lynda (Paul) Stanifer of The Woodlands, TX; her twin sons, Larry (Amiee) Butcher and Jay Butcher, of Baton Rouge along with 17 grandchildren and 16 great-grandchildren. She is also survived by her last remaining sibling, her brother, Laurence (Bonnye) Stuart of Tega Cay, SC. Gloria will continue to provide protection over the 17 grandchildren who lit up her life, Leigh Anne Hammond, Chattanooga, TN; Robert Hammond III, Cleveland, TN; Jennifer England Thomas, Atlanta, GA; Blake England, Chattanooga, TN; Britton Davidson, Los Angeles, CA; Jordan Davidson, Winter Springs, FL; Maggie Davidson Elliott, Winter Springs, FL; Peter Nictakis, New York, NY; Christopher Greenwood, Chattanooga, TN; Sarah Greenwood Harris, Austin, TX; Morgan Stanifer Weller, Madisonville, LA; Hannah Stanifer Steber, Raleigh, NC; Hayden Stanifer, Dallas, TX; Josh Gwin, Baton Rouge, LA; Jacob Gwin, Baton Rouge, LA; Daniel Butcher, Baton Rouge, LA; Matthew Butcher, Baton Rouge, LA. The family will host a celebration of Gloria’s full life on Monday, May 16, 2022, from 3:00 – 6:00 pm at The Greenoaks Reception Center located at 9607 Florida Boulevard, Baton Rouge, LA, 70815. “Her children rise up and call her blessed; her husband also, and he praises her: ‘Many women have done excellently, but you surpass them all’.” Proverbs 31:28-31
See more See Less

In Memory Of Gloria Butcher