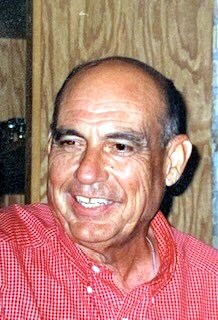 Leroy “Lee” Paul Guidry, born on September 21, 1940, passed away peacefully at his home, Wednesday, August 3, 2022, at the age of 81. He was a native and lifelong resident of Baton Rouge, LA. Lee was a graduate of Catholic High School and joined the Army where he trained at Fort Polk, LA. Lee worked for the EBR Sheriff’s office for over 29 years where he retired as the Chief Civil Deputy. Lee had an undeniable love and passion for the sport of horse racing. He also enjoyed fishing at the camp in Leeville, LA, with his wife, Tickie, and his brother, Carl & his wife, Barbara. Baseball, football, basketball, he enjoyed following them all, especially the LSU Tigers! He was an exceptional cook and enjoyed preparing special dinners for his family and friends. He’d let you know repeatedly just how much he enjoyed his dinner as well. And, dinner wasn’t complete without one of his many favorite desserts. Lee is survived by his brother, Judge Carl Guidry, wife Barbara; nieces and nephews, Tommy Guidry, wife Margaret, Stacie Whitesell, Kevin Guidry, wife Dr. Kathy Guidry, Greg Guidry, wife Susan, Gerard Guidry, Susan Aguilar and partner Jim Dutcher, David Guidry, Stephanie Aucoin, husband, Paul, and his sister’s children, nieces; Mary Ann, Patricia, Sherry, Zena & Larrie; stepchildren, Karen Zimmerle, Dwayne Zimmerle, Cindy Maranto, husband Nufer, Barry Zimmerle; and a host of other family members. Lee is preceded in death by his wife, the love of his life of 48 years, Clotilde “Tickie” Guidry; parents Louis and Edna Guidry, sister Edna Mae Laughrey, husband Larry; infant brother Charles Guidry; stepchildren, Craig Zimmerle and Diane Zimmerle Short. Visitation will be at St. Agnes Catholic Church, 749 East Blvd. Baton Rouge, LA, on Friday, August 12, 2022, from 10am until the Mass of Christian Burial at 11am, celebrated by Fr. Frank Uter. Inurnment will immediately follow at Greenoaks Memorial Park, 9595 Florida Blvd. Baton Rouge, LA. The family would like to extend a very special thanks to caregivers, Jackie Brue, April Wilson and Magdalene Jno Baptiste for their exceptional care for Lee, Dr. Leo Blaize and Dr. Carl Luikart, and the entire staff of Hospice of Baton Rouge, especially Lee’s nurse, Amy Roth. And, without a doubt, to his brother, Carl “Gee” Guidry, who went above and beyond, for his constant care, love & thoughtfulness and to his niece and nephew: Susan Aguilar and David Guidry for their tender-loving care.
See more See Less

Send flowers in the next 12 hours for guaranteed delivery.