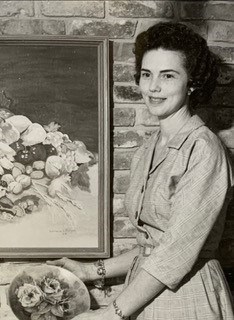 Lorraine Mungall of Baton Rouge, born in 1929 in Houston, Texas, died Sunday, April 11, 2021 after a long battle with Alzheimer’s Disease. She was laid to rest at Port Hudson National Cemetery with her late husband, Thomas Gordon Mungall, Jr., on Friday, April 16, 2021. She is survived by son, Thomas Gordon Mungall, III, and wife, Catherine, of Baton Rouge, daughter, Mary Louise Mungall, and husband, Glen Chidester, of Pensacola, Fla.; four grandchildren, Travis Chidester, and wife, Janies, of St. Augustine, Fla., Tiffany Sellers, and husband, Ory, James Mungall, and wife, Sara, and Ian Mungall, and wife, Emily, all of Baton Rouge; and five great grandchildren, Myles, Spyder, Ezra, Skyler, and Virginia, with two more on the way; a niece and namesake, Jeanette Lorraine Marshall Batchelder, and husband, Wesley, and nephew, Norman Lee Marshall, Jr., and wife, Ronica. She was in the Scottish Brigade at Stephen F. Austin HS. She studied portraiture, still life, and fashion design with Ethel Critendon at the River Oaks Studio Arts of Houston; china painting and oil painting with Minnie Kaltz of Houston, (who had studied with the distinguished Franz A Bishchoff); life drawing with Lowell Collins of the Museum of FA Houston; and portraiture with Harry Worthman of Texas. She attended the University of Houston, where she studied acting, and met the love of her life, Thomas G. Mungall Jr., (son of Thomas G. Mungall Sr and Myra Herrington). Lorraine devoted her life in service to God and her family. A loving wife, mother, and “Grandmommie,” she expressed some of her many joys through painting, travel, gardening, baking, and talking about life and faith in her Lord and Savior Jesus Christ. She was active in the community as a member of Our Lady of Mercy Catholic Church, the Baton Rouge Art League, the Caledonian Society of Baton Rouge, the Baton Rouge Garden Club, and the Wally Byam Caravan Club of Baton Rouge. Pallbearers were Thomas Mungall, James Mungall, Ian Mungall, Ory Sellers, Rick Bowles, and Joshua Jones. Honorary Pallbearers were Glen Chidester, Travis Chidester, Roland Glover, David Brown, and Darryl Lively. In lieu of flowers, memorial donations may be made to the St. Jude Children’s Research Hospital: stjude.org.
See more See Less

In Memory Of Lorraine Mungall