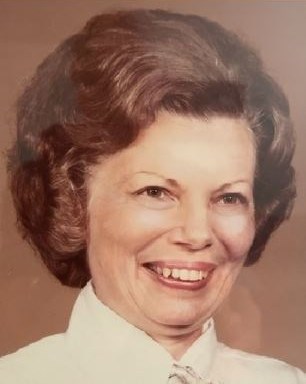 A devoted wife, loving mother, grandmother, great grandmother and good friend to many, Peggy F. Anderson departed this world and entered her eternal heavenly home, Saturday, September 17th, at 9 AM. She was 92 and a resident of Baton Rouge. Peggy took great pride in caring for her home and family in an exemplary manner. Peggy was a member of First Presbyterian Church but frequently worshipped with her family at Faith Presbyterian Church. In keeping with Peggy’s wishes, memorial arrangements will consist of only a graveside service at Roselawn Cemetery (4045 North St, Baton Rouge, LA 70806) on Friday, September 23rd at 11AM, conducted by the Rev. Stephen Wallace. Peggy was preceded in death by her husband of 73 years, Robert J. “Jack” Anderson, her mother, Kathryn C. “Kayde” Frazier, and her father Francis G. “Chief” Frazier. She is survived by her son and daughter-in-law John M. “Buddy” Anderson and Cheryl B. Anderson; Grandchildren, Nichole C. Anderson; Stephen M Anderson and granddaughter-in-law Ashley M Anderson; great grandson Lincoln M. Anderson and numerous nieces, great-nieces, nephews and great nephews. Rabenhorst Funeral Home is in charge of arrangements. To view and sign the online guestbook, please visit www.rabenhorst.com
See more See Less

In Memory Of Peggy F. Anderson