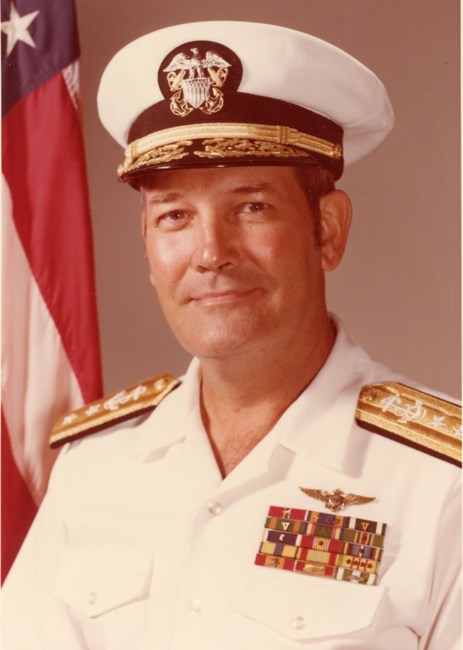 Richard “Dick” Tillman Gaskill died on 2 July 2020 in his home in Pensacola, Florida. Richard epitomized the “Greatest Generation” ethos of God, Country, Family. Richard was born in Dallas, Texas, on 18 March 1932, to Grace Gaskill (Tillman) and Oscar Alexander Gaskill. To avoid the polio epidemic and for better schools, his mother moved the family to Marshall, Texas, where Richard excelled at academics and tennis, and earned the Eagle Scout in Boy Scouts. When he was 12 years old, to help his family financially he delivered newspapers on his bicycle before school and delivered Western Union telegrams after school. From his first paycheck until the day she died, Richard sent his mother part of every paycheck he received. After graduating from Marshall High School in 1948, Richard won a scholarship to Texas A&M University and studied Electrical Engineering before entering the US Naval Academy (Class of 1954). After graduating near the top of his class and as company commander, Richard began training in jet aircraft. At this time he attended a Louisiana State University football game dance where he met the love of his life Diane Chachere Gaskill. After the dance, Diane told her father she had met the man she was going to marry. They were married on 11 June 1955 and remained together for 64 years until Diane’s death in 2019. From 1958 to 1963, Richard served as an attack pilot with VA-15 and VA-12, and as a flight instructor at NAS Cecil Field, Florida. A skilled tennis player, he won the 1962 All-Navy Tennis Singles Championship. In 1965, he earned a Master of Arts in Political Science from the University of California. In 1967, Richard reported to VA-22 at NAS Lemoore. He was VA-22 Operations Officer, Executive Officer and then Commanding Officer. He deployed to Vietnam several times and flew over 200 combat missions. A natural leader, he cared for his men and always led from the front. Richard was selected by Adm. Rickover for the Navy nuclear power program and after successfully completing it reported to USS Enterprise (CVN-65) as Executive Officer. In 1974, Richard reported to the USS Concord (AFS-5) as Commanding Officer and under his command Concord won the Battle Efficiency “E”, Engineering “E”, and Ney Award. In 1976, Captain Gaskill assumed command of the USS Nimitz (CVN-68). After leaving the Nimitz, Richard was the first of his class to be promoted to Rear Admiral. Admiral Gaskill served in the Pentagon as Director, Military Political Policy (OP-61), before retiring in 1981 as a Rear Admiral. After retiring from the Navy, Richard and Diane settled in Pensacola, Florida, and traveled the world extensively visiting every continent except the Antarctic. He loved being with his grandchildren, teaching them to ride bicycles, play tennis, and to throw a football and baseball. He frequently included them on trips to Africa, Europe, and around the United States. When not traveling, Richard taught at the US Naval War College, was Vice President of a regional bank, and earned an MBA. He and Diane were active Christians and were 2 of the founders of Perdido Bay United Methodist Church in Pensacola, Florida. They were also very active in Pensacola First United Methodist Church and Gulf Breeze United Methodist Church. Richard is survived by his sister Betty Brown of Dayton, Texas, daughter Debra, son Dodge, son David and his wife Donna, grandson Richard, granddaughters Katherine and Mary, and great grandchildren Lilli, Aunaleah, and Elias. Richard will be buried next to his beloved wife Diane in Magnolia Park Cemetery in Dayton, Texas.
See more See Less