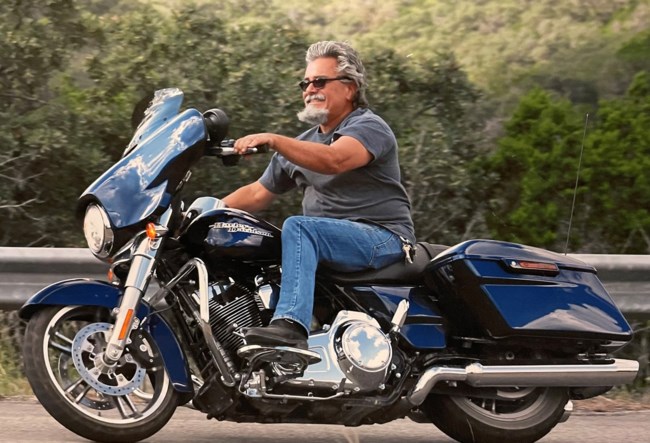 Robert (Bob) Wade Albright of Leakey, TX passed away on September 14, 2022. Bob was born on December 15, 1953, to John Henry Albright and Oneta Beth Albright in Baytown, TX. Bob attended Ross S. Sterling High School and graduated in 1972. After high school, Bob began his career as a carpenter. Bob was a member of The United Brotherhood of Carpenters and Joiners of America Local Union 551 for over 35 years. After moving to Leakey in 2000, and being an avid motorcycle rider, Bob recognized the potential for developing a motorcycle community. In 2002, Bob and Robin began Frio Canyon Motorcycle Stop. In 2007, the location of the store moved, and the Bent Rim Grill was formed. During this time Bob was very influential in the economic growth of the motorcycle community. Bob is proceeded in death by his parents, Beth and Johnny Albright, sister Connie Layne Walls, and sister Donna Loyce Perry. Bob is survived by his wife of 34 years, Robin, son Jacob and wife Megan of Dickinson, daughter Jaquelyn and husband Rene of Goliad. Bob has 4 grandchildren, Jaiden Albright, Asher Albright, Remi Albright, and Ryan Rubio. Services will be held October 8, 2022, at 11am, at Navarre Funeral Home, 2444 Rollingbrook Dr., Baytown, TX 77521. Followed by a reception at Neon Moon Saloon, 1201 South 16th St., LaPorte TX 77571.
See more See Less

In Memory Of Robert (Bob) Albright