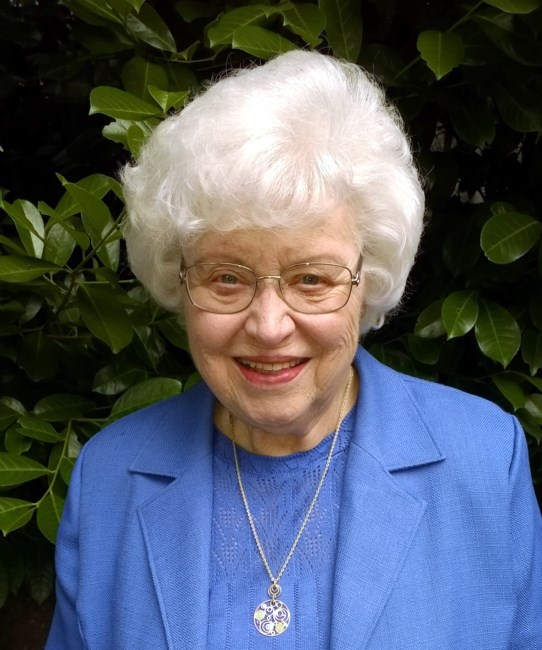 Le Etta Nadine Benke (Longjohn)went to with the Lord on September 20, 2022. She is survived by her husband William Benke, their son Daniel Phillip Benke, daughter Pamela Ann Noel, five grandchildren, Danielle Benke, Dustin Benke, Drew Benke, Kristel Shelley, Gabriel Noel, four great grandchildren, Nova Benke, Aurora Benke, Elowen Shelley, Michael Shelley, her sister Hope Dekorte. Le Etta was born on September 26, 1924 to Hazel and William Longjohn in Kalamazoo, Michigan, the third of five children, three girls and two boys. Le Etta grew up and lived in Kalamazoo until she met her husband, Bill. The elementary school (through 8th grade) she attended was a two-room schoolhouse of about 60 students where she was an outstanding student and frequently helped the teacher with instruction, graduating at age 16. Following high school Le Etta pursued a career as a legal secretary, attending the Mahers Business College. She completed the two-year Executive Secretary program in less than a year, graduating at age 17, the youngest graduate in the school’s history. Her life took on special meaning and purpose when she invited Christ into her life as Lord and Savior while attending the Maranatha bible conference on the beautiful shores of Lake Michigan. She met her husband, Bill in Kalamazoo and they were married in 1956, six months after their first date. Shortly after their marriage they moved to New York and then to Seattle as Bill’s job brought location changes. During her early years in Seattle she worked for Boeing as an executive secretary, and later was employed as a legal secretary by several law firms. She later worked as executive secretary for Qualstar Credit Union and served on its Board of Directors for many years. Le Etta and her husband Bill were blessed with two children, of whom they were very proud. Daniel became a helicopter pilot, served in Iraq with the U.S. Army and later served as an outstanding civilian helicopter pilot in a variety of assignments. Pamela became an outstanding registered nurse and mother. Le Etta was an active Christian layperson and served in a variety of volunteer roles. She was the organist at Calvary Bible Church at the time she met Bill. She also served as organist for the Bible Baptist Church of Burien, where she and her husband were also youth leaders. She was the building program secretary for Westminster Chapel during its early years of major building construction. Le Etta and her husband were recipients of the Volunteer of the Year Award from the Washington Family Council for their work in initiating and producing the bi-monthly “Community Impact Bulletin”. She was a member of the Gideons International Auxiliary organization for many years, an organization engaged in the worldwide distribution of bibles. Le Etta and her husband worked as a team in all aspects of their married life, including five books published on the subjects of church ministries outreach and real estate investments. She and her husband moved to Emerald Heights retirement complex in 2008 and resided there until her homecoming to heaven
See more See Less

In Memory Of Le Etta Benke