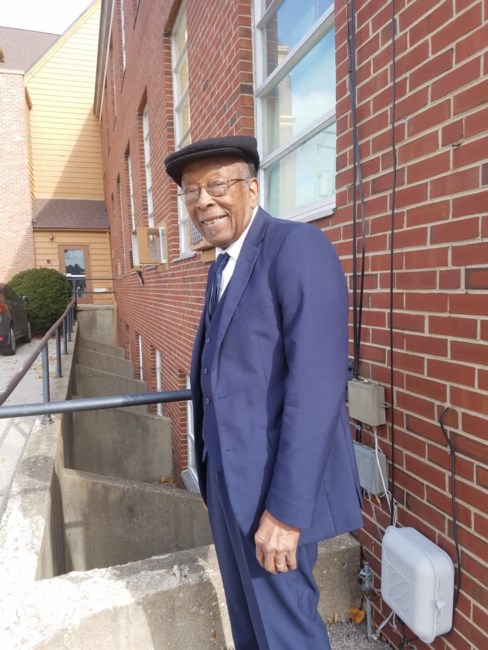 EARTHLY JOURNEY OF RICHARD LEE JOHNSON, SR. On November 19, 1931, a humble, southern gentleman with a huge grin, named Richard Lee Johnson, was born in Delhi, Louisiana to Jack and Carrie Johnson. Richard was the oldest of 10 children and he took his role of a big brother seriously. He nurtured his siblings and was a fierce protector. As he was growing up, he farmed along with his father Jack to help support the family household. It was there where he developed his strong work ethic which continued throughout his life. Richard was gifted with the ability to repair and assemble anything. As a young adult he worked as an appliance repairman in Delhi, LA. Richard married his childhood sweetheart Roxie Drummer on November 13, 1952. Roxie affectionately called him “Chap” and they were married for nearly 66 years. They relocated to the big city of Chicago in 1954, where Richard began his career at McCormick-Stange Flavor Company. Richard opened his heart and his home to many family members after they also relocated to Chicago. He worked there for 38 years before retiring in 1992 as a Shipping and Receiving Foreman. During his 38 year career, he only took three sick days! Together, Richard and Roxie raised six God fearing children in a loving and faith-based home. Richard instilled a strong work ethic and faith in his children, grandchildren and great-grandchildren. He taught them to be honest and fair in the treatment of others as well as to be leaders and not followers. He taught them that a good attitude would determine their success in life. He also taught them that helping others was their God given duty. Richard had a passion for cars, and was also a superb grill master!! Richard loved to joke around and enjoy life with his family and friends. On a sunny Friday morning, September 16, 2022 at 9:04 a.m., God called Richard home to rest and to receive his crown of glory. Richard leaves to cherish his legacy, his children: Polly (LePatrick), Latricia (Rian), Ellis (Davette), Kenny (Melissa) and one son-in-law Cedric Carter; twelve grandchildren, thirteen great-grandchildren and two great-great grandchildren; five sisters: Hattie, Emma (Calvin), Maggie, Lucille (Johnny), Lettie and one brother: Lonnie (Faye); one sister-in-law: Eva Lowe and one brother-in-law: Bill Stubblefield and a host of nieces and nephews. Richard is joined in glory with his wife Roxie, his daughter Jessie, his parents Jack and Carrie, as well as his three brothers: Ellis, Johnny, and Ervin. They are all now seated at the table with their heavenly father eating Daddy’s famous ribs!!
See more See Less