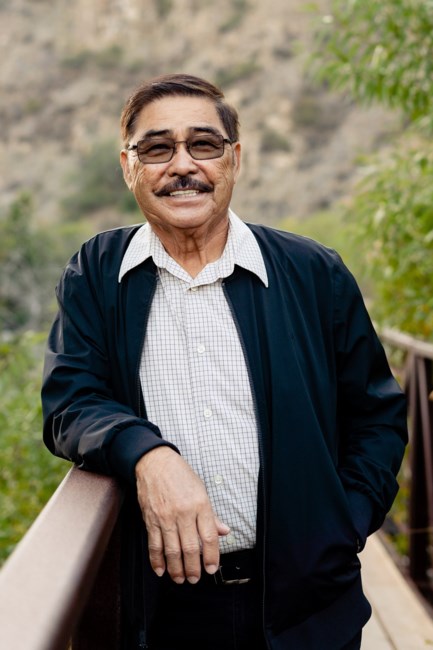 Renato De Dios Paguio passed away peacefully in the arms of his loving wife, surrounded by his children and grandchildren. He entered fully into the presence of the Lord on Thursday, January 13, 2022, at the age of 71 in his home in San Diego, California after a short but courageous four month battle with cancer. Born to Felipe Paguio and Eufemia De Dios on November 1, 1950, in Guagua, Pampanga, Philippines, he is the second of four children, survived by his older sister Carmelita Quinones, younger sister Aida Laxa and younger brother Jimmy Paguio. Rene, as he is known to many, attended Guagua National Colleges (GNC) before enlisting in the United States Navy. He was a decorated sailor at the time of completing twenty years of honorable service, retiring as Senior Chief Machinery Repairman in 1991. He then continued to serve the federal government for another twenty years as a mail carrier for the United States Postal Service. While in the military, Rene married the love of his life, Rita Rodriguez Lapira in San Angelo, Texas on July 6, 1976, after a five year courtship. They would eventually move to their current home in San Diego and have three children. He leaves behind his wife Rita, children Rhea Colunga, Ryan Paguio and Robyn Montillano, children-in-law Ramon Colunga, Abigail Nicanor, and Mark Montillano, grandchildren Casey, Carsyn, Cruz, and Leven, and step-grandchildren Kailani, Aveah, Malia, and Kamea. Even with the grandkids keeping him busy, Rene was able to make time to do the things he loved. He had many talents; a proficient carpenter and handyman being at the top of that list. There isn’t a single inch of their home that he hasn’t improved. He could do it all, from carpentry, to plumbing, to electrical wiring. He was skilled, hard-working, and dedicated which were traits also exhibited in his love for golf. Rene was an avid golfer and committed every Tuesday to play with the Parshooters Golf Club of San Diego. Rene was a loyal disciple of the Catholic faith. He was a member of the Hands of Mater Dei, Heart of Saint Joseph, and the Eucharistic, Service, and Acolyte ministries at Mater Dei Catholic Church. As a member of the Heart of Saint Joseph ministry, he would use his gift of craftsmanship to guide and assist many of the projects at the church. Rene lived a good life, filled with love and devotion and we take comfort in knowing that he is now at peace surrounded by God’s light. The funeral service will be held at Mater Dei Catholic Church, 1571 Magdalena Ave, Chula Vista, CA 91913 on Saturday February 5, 2022, from 10 to 11am with interment immediately to follow at Glen Abbey Memorial Park and Mortuary, 3838 Bonita Rd, Bonita, CA 91902. Please join the family at the Paguio residence at 1pm to celebrate the life of Renato. In lieu of flowers, the family requests those who wish to express sympathy to consider making a donation to Mater Dei Catholic Church at materdeicv.org/giving.
See more See Less