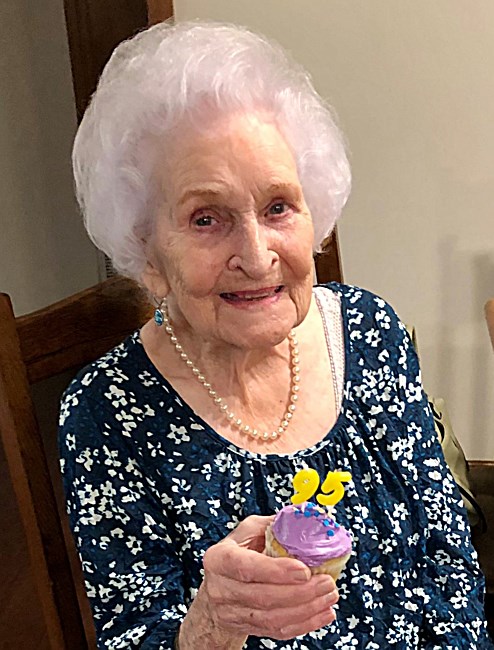 Frances Phillips Brinkley, 95, formerly of Booneville, Mississippi, passed away unexpectedly on Wednesday, September 8, 2022, at Texoma Medical Center in Denison, Texas, with her daughter by her side. Frances was raised in the Altitude community by her loving parents Everett Theophilus “Opp” Phillips and Hattie O’Neal Phillips. Family was the most important thing in her life. Her greatest pleasure and pride were her children and grandchildren. Her granddaughter, Haley, was the first to call her Grandy and the name stuck. All the grandchildren adoringly called her Grandy…and grand she was. You never saw Frances without a smile. She was a “second” mother to her children’s friends and was loved by all. She never let a stray animal pass her house without food or water. The small things in life made her the happiest. Recently, she had moved to Whitesboro, Texas, to live with her daughter and her family. Her final months were spent watching hummingbirds feed, Days of Our Lives, and Wheel of Fortune; growing her African violets, playing cards, eating fried catfish…and basically doing whatever she wanted to do! A Celebration of Life will be held at 2:00 p.m. Tuesday, September 13, 2022, at McMillan Funeral Home. Visitation will be held from noon until service time with burial in the Booneville Cemetery. Minister Jim Estes will officiate. Frances was a member of the Booneville Church of Christ. Frances is survived by her daughter, Susan (John) Krawczyk of Whitesboro, TX; grandchildren, Haley (Kenny) Fuller of Coeur d’Alene, ID, Brent Brinkley of Cape Coral, FL and Zack Krawczyk of Whitesboro, TX; sisters, Pat Phillips and Wynoka Phillips of Booneville; Kenneth (DeeDee) Brinkley Jr. and his family of Vicksburg, MS along with numerous nieces and nephews. Frances was preceded in death by her husband, Kenneth Brinkley Sr.; her son, Bruce Brinkley; her parents, E.T. and Hattie Phillips; sisters, Katie Phillips Henson and Marie Phillips; brothers, J.W. Phillips, Wilford Theo Phillips, E.T. “Todd” Phillips Jr., and Terry Phillips. In lieu of flowers the family suggests donations to the Carter’s Chapel Cemetery Fund located at Bancorp South or Mt. Pleasant Cemetery Fund located at Renasant Bank. Condolences may be left at www.mcmillanfuneralhome.com.
See more See Less

In Memory Of Frances Brinkley