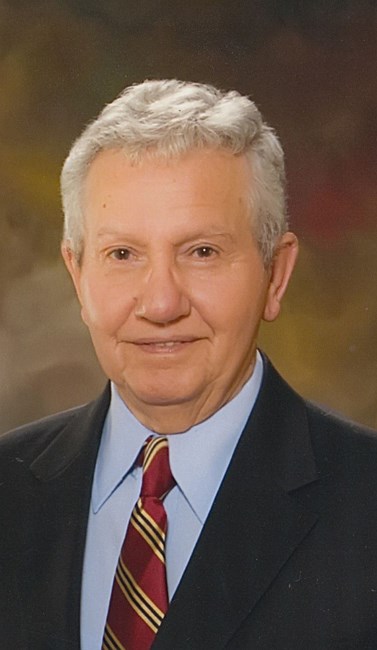 Travis Tynes Stokes, 94, of Booneville passed away on Sunday, September 25, 2022 at the Landmark Nursing and Rehab. He was born on August 18, 1928 to Clovis and Vertie Stokes. On June 27, 1980 he married Lucille Morrison. Travis was a member of the East Booneville Baptist Church, was retired from Prentiss Manufacturing Company and was a U.S. Korean Army War Veteran. He loved the outside and tinkering with his cars which he took great pride in. Funeral services with Military Honors will be at 1:00 P.M. on Tuesday, September 27, 2022 at McMillan Funeral Home with Bro. Steve Howell officiating. Burial will be in the Booneville Cemetery. Visitation will be from 11:00 A.M. until 1:00 P.M. on Tuesday at the funeral home. He is survived by his wife of 42 years, Lucille Stokes; his children, Randy Michael (LeighAnn), Ronald Michael (Emily) and Pam Johnson; his grandchildren, Brian Johnson (Jessica), Brandi Burcham (Shane), Alise Emerson (Joseph), Ashleigh Flurry (Kevin), Tyler Michael, Sara Beth Howell (Blake), Mallory Martin (Austin) and Gracie Stephens (Ardis); Great-Grandchildren, Lucy Johnson, Noah Johnson, Parks Burcham, Pryce Burcham, David Emerson, Will Emerson, Elam Flurry, Mary Michael Flurry, Emmett Flurry, Beckham Howell, Ann Sutton Howell, Dex Martin, Randy Rhett Martin, Baylor Robbins and Everly Stephens; and a host of nieces and nephews. He is preceded in death by his parents, his sisters, Maxine McAnally, Louise Calley, Marie Hurt and Betty Sue Childers and his brother, Freeman Stokes. Pallbearers will be Brian Johnson, Tyler Michael, Joseph Emerson, Kevin Flurry, Blake Howell, Austin Martin, Ardis Stephens and Shane Burcham. Condolences may be left at www.mcmillanfuneralhome.com
See more See Less

In Memory Of Travis Tynes Stokes