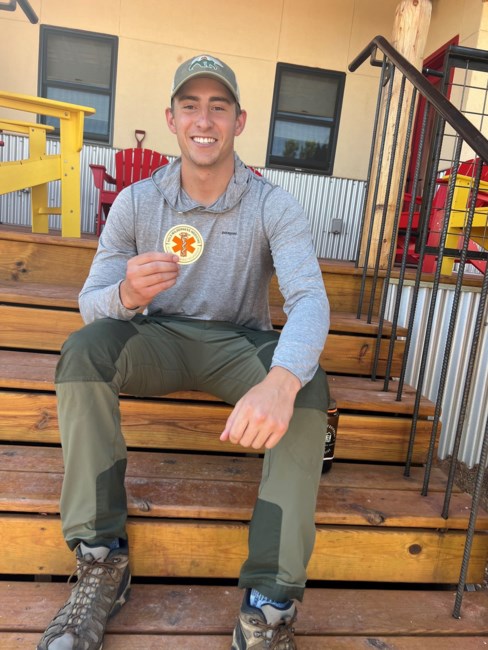 John Douglas Murphy, known to all as “Jack,” died on Tuesday, August 2 near Enos Lake in the Absaroka Mountains of Wyoming. Jack was struck by lightning while on a Wilderness First Responder expedition with the National Outdoor Leadership School (NOLS). He was 22 years young, strong and handsome, with a compassionate and generous spirit that allowed him to connect with others. Jack attended nursery school and elementary school at Park Street School on Beacon Hill, a school his younger sisters later attended and an important spiritual and friend community for the entire Murphy family. Jack attended middle school at Buckingham, Browne & Nichols (BB&N), and high school at Boston College High School where he graduated in 2018 and was a proud member of the rugby team. In addition to making close friends at the schools he attended, Jack had a close group of neighborhood friends as well, many who met as toddlers at Ringgold Park and who later stayed in touch through sports and many family and friend gatherings, adventures, and travels. Jack attended college at the University of Colorado, Boulder where he was a proud founding father of the reestablished Beta Theta Pi fraternity where he held several leadership roles. Jack was a member of a number of other communities including Hill House Boston where he played soccer for many years, and where he was followed by his sisters who loved to follow in his footsteps. Although raised in Boston’s South End, Jack developed a love of the outdoors at an early age. He was lucky enough to spend significant time in Sunapee, NH with family and friends where he loved to ski, skate, and hike in the outdoors. He could often be found after a day of skiing encouraging his friends to stay outside longer, sledding and hiking in the woods. He built many forts in the woods of Indian Cave, many of which survive to this day. As he grew older, he sought out more formal adventures at wilderness camps including with Appalachian Mountain Club, Maine Adventures with Birch Point Camp, glacier training at Mount Baker with his dad, and before his senior year of high school a 5-week Alaska backpacking expedition with NOLS. This Alaska trip was a formative experience and one where he excelled as a chosen leader to others in the group. Despite his wanderings near and far, Jack also had a great love for his family and friends and was content spending the evening at home with his sisters Anna and Charlotte and with his mom and dad. He enjoyed going on many family trips with the Murphy, Kelly, and Collier families, all of whom will cherish the memories happy times together where Jack, the oldest cousin and one of only two boys would actively indulge his sisters and cousins in many antics including dressing up, playing games, jumping on the trampoline, and having lots of required “forced family fun”. His family will cherish the many happy memories of holidays in the Boston area with members of our large Mongeau clan, and more recently with family and friends in Osterville, MA where all spent precious time together during COVID. Jack is survived by many family and friends. He was the beloved son of R. Douglas Murphy and Jeanine Kelly Murphy, and the cherished older brother to Anna Katherine Murphy and Charlotte Kelly Murphy, all of Boston. Grandparents BarBara Zack Murphy of Norfolk, Virginia; Ronald Joseph Murphy and Debra McCabe Murphy, of Louisville, KY; James Joseph Kelly and Anne Kane of Baldwin, NY; and honorary fairy godmother Rye Griswold of Boston. Aunts and uncles, Greg and Beth Murphy of Norfolk; Katie Murphy of Louisville, KY; and Alicia Kelly Collier and Dave Collier of Old Greenwich, CT, and cousins Clara and Maddie Murphy and Grace, Kendall, Leighton, and Harry Collier, as well as many great aunts and uncles and cousins in the Kelly, Mongeau, Zack, and Murphy families. Jack was preceded in death by his maternal grandmother, Katherine Mongeau Kelly. The Murphy family wishes to thank the NOLS guides and fellow students who tried bravely to save him and provided Jack fellowship in what were his last days. The family also thanks Teton County Search and Rescue (TCSAR) for their efforts to save Jack and the support provided for his fellow campers. The family will receive friends on Tuesday, August 9, from 4:00pm-8:00pm at the J.S. Waterman Langone Chapel, 580 Commercial St., Boston. Complimentary Valet Parking Attendants At Front Door. A service celebrating Jack’s life will follow on Wednesday, August 10 at 10:00am at Trinity Church in The City of Boston, 206 Clarendon St., Boston. In lieu of flowers, please consider making a gift in Jack’s honor to the Jack Murphy Wilderness Education Fund, a trust that will support others who have a passion to live, teach, and serve in the great outdoors (contact jackmurphyfund@gmail.com). We also welcome you to consider planting a tree in his honor in a place that is close to your heart where you can pause to remember him. Given the many who loved Jack, the family can imagine a forest growing in his name.
See more See Less