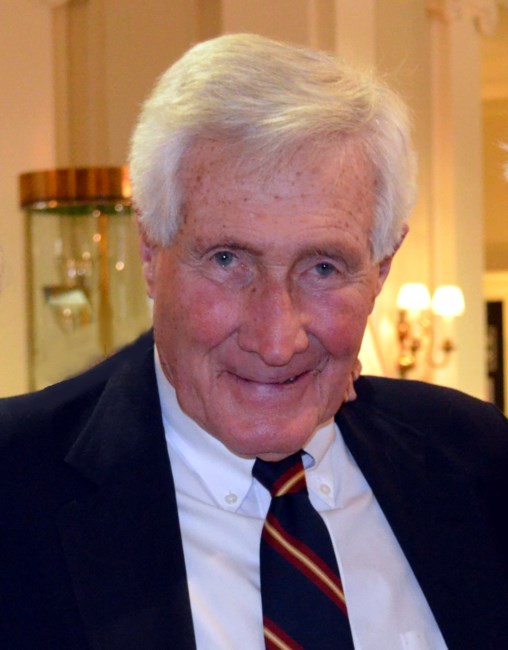 It is with great sorrow that the family of George (“Jay”) O. Jenkins announces his passing on February 4, 2021. Jay was born on February 21, 1933 in Brockton MA. The son of George O. Jenkins Jr and Marcia Godfrey Jenkins, formerly of Bridgewater and Pocasset MA, Jay spent his youthful summers on Cape Cod, a third-generation resident of Monument Beach, developing his love for the sea and sailing. He attended Milton Academy, where he was a member of the varsity wrestling, track and cross-country teams. Although not one of the “superstar” athletes, Jay was someone on whom his teammates relied to keep his shoulder off the mat or push through an impending asthma attack to earn vital points for the team. Jay was recognized for his grit and strength of heart with the Alfred Elliott Award upon graduating from Milton in 1952. As a student in the Class of ’56 at Wesleyan University in Middletown CT he continued running for the varsity track and cross-country teams, but it was his flourishing love of music that defined his years at Wes. He joined an a cappella octet and the Wesleyan Choir, which brought him to Mount Holyoke College for a concert tour. There he met and fell in love with Jennifer Margaret Muus (“Margot”) of Southern Rhodesia, Africa. A serenade months later from the octet sealed the deal, and Jay and Margot were married in December 1956 in her hometown of Selukwe. Soon, they welcomed three children to their family, Scott, Gail and Keith. Employed as sales manager at the George O. Jenkins Company of Bridgewater MA, Jay traveled extensively throughout the nation and the world, selling products used in the shoe and auto industries and nurturing lasting relationships with colleagues and clients alike. His dedication to service in his community started as a leader of Boy Scout Troop 44 for eight years as a sponsor. The family moved to St. Louis MO in 1965 where Jay was Jenkins Company’s Sales Coordinator for four years. During this time, he recruited and interviewed prospective students for Wesleyan University in the inner city and suburbs, as well as led a church youth group. In 1969 the family returned to New England, living in Hingham MA for the next 21 years. There, Jay was an active leader in the Hingham Congregational Church and became a trustee of Brockton Hospital. While president of the family business, the company was purchased in early-1970s by Freudenberg Company of Weinheim, Germany. Jay was asked to stay on with Freudenberg to help establish a new flooring division, and he continued to work for them for eleven years. In 1981 Jay joined Biltrite Company, starting a new flooring division there, and worked with Biltrite as vice president until his retirement in 1995. Jay & Margot continued to fulfill their passion for travel and appetite for life-long learning until 2019. By sea they sailed with friends up and down the east coast, into Nova Scotia and around the Caribbean. By air their adventures were in Africa, Europe, South & Central America, Canada and around the US. A year-round resident of Wings Neck in Pocasset MA since 1990, living in the home he grew up in, Jay has been an active community volunteer and leader. He was vice president of both Buzzards Yacht Club and Buzzards Sailing School for many years, served seven years as a trustee for Wings Neck Trust, and was a steadfast member of the Waterloggers, the Operations Committee and the Social Committee. Beyond the Neck, he served for fourteen years as president of the Bourne Society for Historic Preservation where his proudest accomplishment for the town was saving the Coady School for repurposing as senior housing. The Pocasset Village Association and the Bourne Historic Commission continued to occupy his time until he resigned from the Commission in January of this year. Jay’s interests in sailing, model shipbuilding and clock repair were compromised by a stroke in June 2019, but he showed his lifelong grit during rehab and as he battled with one, then two forms of cancer in his last five years. His kindness, his appreciation for others, and his strength of heart and character were evident to the end. Jay is survived by his wife of 64 years Margot, his children - Scott Jenkins and his partner Andi White of Port Charlotte FL, Gail Jenkins Farris and her husband Jay Farris of Atlanta GA, Keith Jenkins and his wife Marybeth Jenkins of Hanover MA - and four grandchildren – Kimberley Farris Buckley, Jennifer Farris, Dean Farris and Ellen Jenkins – as well as sister-in-law and her husband Diana Muus Duclos and Ken Duclos of Stowe VT, sister-in-law Shirley Muirhead Jenkins of Duxbury MA, nephew Peter Jenkins of Newport RI and niece Susan Jenkins Warren of Duxbury. A small, private gathering will take place this summer. In lieu of flowers, donations in Jay’s memory can be made to: Bourne Conservation Trust PO Box 203 Cataumet, MA 02534-0203 Donation Form: https://www.bourneconservationtrust.org/bct_donation.pdf
See more See Less