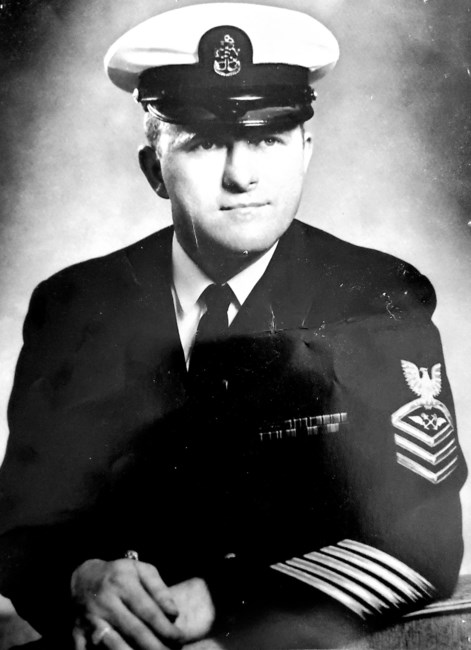 John Robert Hanley “The Chief” 94, of Mashpee, passed away peacefully on Wed., August 26, 2020. A native of South Boston and a graduate of South Boston High School, he served in the United States Navy during WWII and Korea 1943-1963, fleet reserve until 1973. John retired from the Navy as a Master Chief Petty Officer. He worked as a letter carrier in Grove Hall and was a member of the National Association of Letter Carriers. In 2017 he was an honored veteren with the HONOR FLIGHT OF NEW ENGLAND along with many other proud veterans. He served a hitch on the U.S.S Valley Forge. He was a member of the Elks, Knights of Columbus, American Legion and the Chippewa Club in South Boston. Son of the late John O'Hanley & Mary (Mac Donald) of Prince Edward Island, Canada. He was the beloved father of Patricia M. Kelly and her husband, Richard, of Mashpee, Kathleen Kiley of Easton, Ellen Hanley of South Boston, Richard Hanley and his wife Christine of Florida, and the late John (Jack ) Hanley of Hyde Park and Raymond Hanley of Dorchester. Loving brother of Frederick "Hacka” Hanley of South Weymouth and the late Morton Hanley, Joan Collins and Francis Hanley. Also, survived by 13 grandchildren and 16 great-grandchildren and many nieces, nephews, cousins and friends. John loved his country and was beloved by all his family (The Alex Little Johnny Clan) & friends. JOHN cherished his trips back to our family's beautiful Prince Edward Island, Canada which he loved so much. John also loved life, family, friends, music and laughter. JOHN, ROBERT, DAD, GRANDPA, GREAT GRANDPA, UNCLE, COUSIN, FRIEND AND THE CHIEF will be remembered & loved in our hearts forever. His visitation will be held at Nickerson-Bourne Funeral Home, 40 MacArthur Blvd., Bourne from 10 to 12 noon on Wednesday, September 2, 2020 followed by a Funeral Service at noon in the funeral home. Interment with full military honors to follow at Massachusetts National Cemetery. Donations in memory of John may be made to the Alzheimer’s Assoc., 309 Waverley Oaks Rd., Waltham, MA 02452. For on-line tributes, please visit www.nickersonbournefuneralhome.com
See more See Less

In Memory Of John Robert Hanley