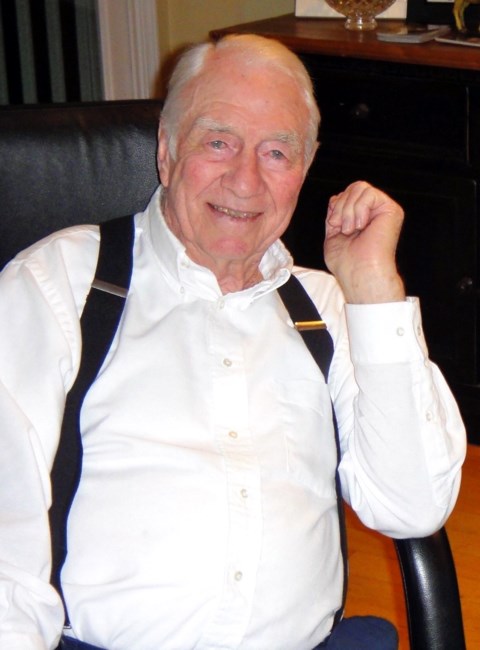 Elbert “Buzzy” Edward Lancaster, age 92, passed away on Monday, May 27, 2019, at the Chesapeake Hospice House in Harwood, Maryland. Buzzy was born on December 30, 1926, at his family’s home in Bowie, Maryland, to the late John and Ethel Lancaster. Buzzy attended the Old Bowie School, and went on to work as an engineer for the State of Maryland for almost 40 years. He married the late Kathleen Ann Comerford, and together they raised one son, Timothy A. Lancaster. Kathleen and Buzzy were together and married for more than 20 years, until her untimely passing in 1973. Buzzy was a longtime companion of Fran DiCarlo until her passing in 1995. Soon after he met Shirley Heilig, and the two were longtime companions until his recent passing. His pride and joy was his three granddaughters. In 1989, Timmy married Patricia Killeen, and soon after, Buzzy became grandfather to Meaghan, Erin, and Mary Eileen Lancaster. He loved spending time with his three granddaughters. He found great joy in watching them grow up, and was always their number one fan. Buzzy was happiest at his waterfront property in Bushwood, Maryland, where he enjoyed hunting, fishing, and spending time with family and friends. He loved eating Maryland crabs and drinking ice cold beer. Buzzy loved all animals, especially dogs and horses. He was very active and involved in his community, having served as the president of the Free State Riding Club, a member of the Maryland Underwater Rescue Team, a life member of the Knights of Columbus, a 33-year member of the Sons of the American Legion, a life member of the Disabled American Veterans Auxiliary, a member of Prince George’s County Ducks Unlimited Chapter, a member of the Legion of the Moose, a member of the Huntington Heritage Society, and a lifelong member of the Ascension Catholic Church. Buzzy simply lived life to the fullest, and will forever be remembered for his witty jokes and extensive collection of suspenders. He is survived by his son, Timothy A. Lancaster; daughter-in-law, Patricia K. Lancaster; and three granddaughters, Meaghan K. Lancaster, Erin E. Lancaster, and Mary E. Lancaster. Friends may call on Monday, June 3, 2019, from 6 to 8 PM at the Robert E. Evans Funeral Home in Bowie, MD. A Mass of Christian Burial will be offered at 11 AM on Tuesday, June 4, 2019, at Ascension Catholic Church in Bowie, MD. Interment at Fort Lincoln Cemetery following the Mass. In lieu of flowers, memorial contributions may be made in Buzzy’s name to the American Legion Disney Bell Post 66, 9605 Old Laurel Bowie Road Bowie, MD 20720; Ascension Catholic Church, 12700 Lanham Severn Road Bowie, MD 20720; or John and Arloine Mandrin Chesapeake Hospice House, 3675 Solomons Island Road, Harwood, MD 20776.
See more See Less