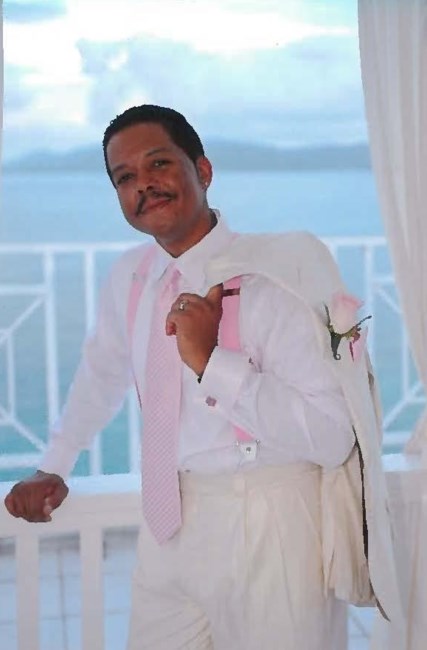 Erroll Francois King was born in New Haven, CT to Earl and Arlene King on December 15, 1967. Erroll excelled in sports and public speaking as a child. He received numerous awards in track & field, swimming, kickball, softball, and basketball. In college he pledged Kappa Alpha Psi Fraternity Incorporated, while attending the University of Maryland Baltimore County. At the age of 15, Erroll was diagnosed and treated for Hodgkin’s Disease; and like the fighter he’s always been, successfully beat the disease. Erroll worked as an operations manager in banking and various other fields. His last position was at Blackboard Inc. where he worked on the Finance Team. Erroll married Gwen Washington on November 10, 2011, in St. Thomas, Virgin Islands. Erroll was an active participant in Men’s Season at Ebenezer’s AME, in particular the annual cook-off. He also worked in the production area of the church. Erroll was an avid New Orleans Saints fan and cherished the fleur-de-lis. After a hard-fought battle with gastric cancer, Erroll passed away peacefully on October 17, 2019 at his home in Bowie, MD. Erroll’s compassion, helpfulness and friendliness will never be forgotten. Erroll is survived by his loving wife, Gwen; parents, Earl and Arlene King; sister, Rolena King; daughter, Sydney King; stepchildren Sheria, Maurice and Arianna Washington; and step granddaughter, Ilana Washington, the apple of his eye. Erroll was preceded in death by his sister Arlana Maria King and his step grandson Isiah Washington. He’s also cherished by a host of friends who loved him like a brother.
See more See Less

In Memory Of Erroll Francois King