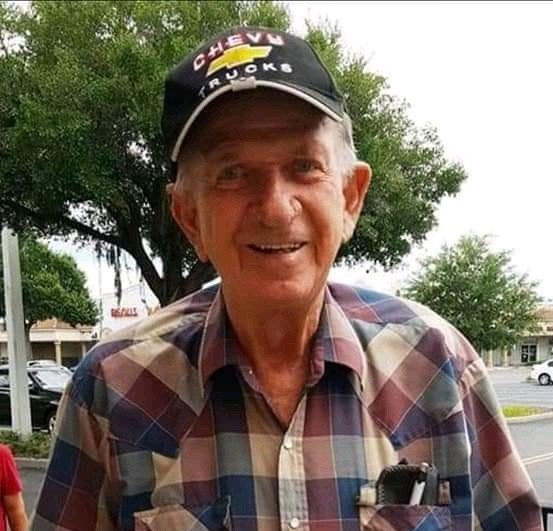 Doyle R James, 88, passed away peacefully at his home in Seffner, FL on Sunday, July 11, 2021, with his loving wife Lucille and his daughters Marie and Kathleen by his bedside to bring him comfort. He is now free from the horrible confusion of Alzheimer's and immobility that he has suffered from for the last several years. Doyle was born on August 16, 1932, in Coletown, Darke County, OH at the home of his parents Raymond and Irene (Dixon) James. Doyle was a hard-working family man who provided for his wife and eight children. He was a master plumber, beginning his career over 60 years ago and owning his own business until he retired to Florida in 1992. Doyle is still well-known and respected amongst the professional plumbing community in the Dayton, OH region. He was inspired to become a plumber because he never had indoor plumbing growing up. After retiring to Florida, he continued to work as a plumber, doing lawncare and other miscellaneous odd jobs well into his 80’s. Doyle liked to keep busy. He loved working on his projects, especially his yellow 1952 Chevy truck. He was a quiet man but loved a good joke and seemed to know people everywhere he went. Before moving to Florida, Doyle was an active member of the St. Augustine/St Charles parish (Jamestown/South Charleston, OH), and more recently was active in the St Francis of Assisi parish in Seffner, FL. Doyle was preceded in death by his father Raymond E. James, mother Naomi I. (Dixon) James, brothers Albert James, Ronald James, daughter Lucille H. (Robert) Williams, son Cletus A. James, grandsons Benjamin James, James Evans, and is survived by his wife of 65 years Lucille H. (Grillot) James, siblings: Betty Smith, Norma Gillespie, Rita Elsner, Linda Strausberg, and Larry James, six surviving children: Marie I. (John) Craig, Kathleen M. James, Doyle R. (Patricia) James, Jr., Michael P. James, Jessica D. (Michael) Bertorello, Nicholas P (Gaye) James, 16 grandchildren: Henry Dailey, Cletus (April) Dailey, David (Melissa) Dailey, Joshua Bland, Naomi (Greg) Jaschke, Erica (Robert) Simison, Charles (Jen) Evans, Jr., Elyse (John) Patenaude, Ariel (Stephen) LaCroix, Lynn Hines, Lexy James, Gabrielle Bertorello, Leo Bertorello, Joshua Cox, Trevor Cox, 20 great grandchildren, 1 great-great grandchild, and many nephews and nieces. No funeral services are currently scheduled.
See more See Less

In Memory Of Doyle Richard James