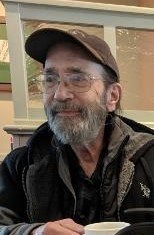 Stephen (Steve) Giffin Hunt was born in Columbus, Ohio June 7, 1955 to Howard and Virginia (Giffin) Hunt. His family moved to Greenbelt when he was 2 months’ old. He grew up in a GHI home on Crescent Road with his father and mother and two brothers. Stephen was an altar boy in his younger days at Mowatt United Methodist Church, where his mother Virginia was the church secretary. He was briefly involved in scouting. Steve spent many summers of his childhood at his grandparents farm in Van Wert, Ohio. He attended elementary and middle school in Greenbelt and graduated from Parkdale High School class of 1973. Later he would go on to be a student at the University of Maryland, where he earned his bachelors’ degree in sociology. He worked for over 40 years in building supply as a warehouseman, forklift driver, customer service rep, night manager, and other positions. He lived in Greenbelt his entire life. Steve had many hobbies and interests. He was an ardent Trekkie who watched every movie and TV series episode of the Star Trek collection. He was also an avid Doc Savage reader and enjoyed Dr. Who, as well as many other sci-fi books and movies. He was a true hardcore Washington Commanders football fan and would not allow any disruptions during the games. Steve listened to many styles of music from classical to rock, and played the guitar. He loved camping, hiking, bicycling, photography, traveling, astrology, and jewelry making. He liked socializing with his neighbors, and spending time with his family. He was a loving and giving husband and father, always remembering birthdays, anniversaries and other special times. He always made time to go on vacations with his family relishing the countryside as well as the shore. He took his son to every scout meeting and camping trip, which was a joy for the both of them. He volunteered at the Boy Scout booth at the Labor Day festivals. He passed comfortably on May 6th, 2022 at Southern Maryland Hospital. Steve is preceded in death by his mother, father and his older brother Howard “Skeeter” George Hunt. He is survived by his wife Melinda, son Stephen Jr., brother Christopher Hunt, many brothers and sisters in law; Rene Hunt, Mark and Maureen Francis, Phil and Marilyn Simmers, Philip Ball, and Randel Ball, as well as many nieces and nephews. Please give donations to the American Heart Association or the American Cancer Society in lieu of flowers.
See more See Less

In Memory Of Stephen Giffin Hunt