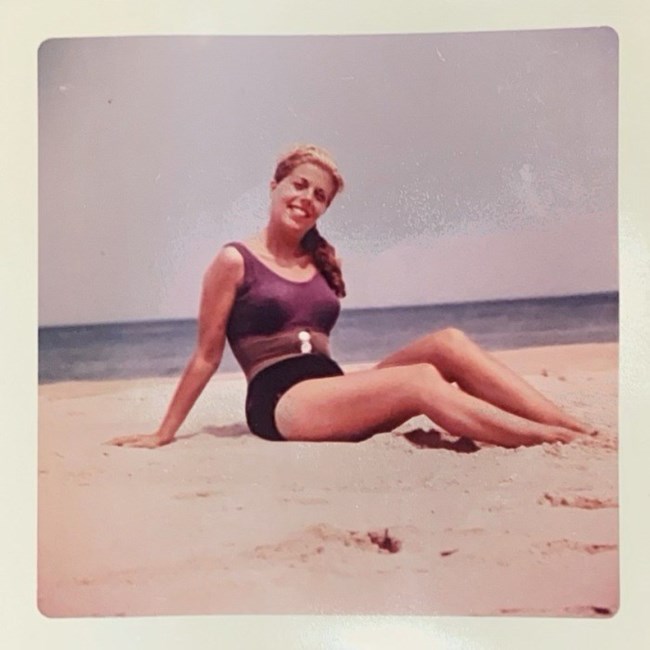 Anne Horowitz, a native of Chelsea and Brighton, Massachusetts, died peacefully and surrounded with love, on September 29 in Kensington, MD. Anne was predeceased by her parents Morris and Stella Bornstein of Chelsea, MA, her sister Jeanette Bluestein of Medford, MA, and her beloved husband of 28 years, Fred Horowitz of Suffern, NY. Survivors include her daughter Stacy and her husband Frank, who reside in Nantucket, MA; her son Michael and his wife Alexandra, who reside in Chevy Chase, MD; and her five grandchildren, Frederick, Clea, Maddeline, Ruby, and Phoebe. Anne grew up in Chelsea and Brighton, MA, and had a love for fashion, design, and clothes. After high school, she went to the New England School of Art in Boston and for years designed, made, and modeled her own dresses and outfits. She also was a proud and sophisticated bargain shopper, and her favorite store was the original Filene’s Basement on Washington Street in Downtown Boston. She knew fashion trends and had a knack for finding the best designer clothes and shoes at the biggest discounts. Throughout her life, every closet that she had was stuffed full of designer clothes and shoes — and all from discount stores like Filene’s Basement, Marshall’s, and TJ Maxx. She also loved the beach, regularly going to Revere Beach with her parents when she was young and then to Cape Cod summer after summer as an adult (including later in life with her children and grandchildren). Anne, however, met her future husband Fred not at the beach, but rather during a ski trip to Maine — a trip Anne went on with her girlfriends even though Anne had never learned to ski (Fred, on the other hand, was an avid skier, having skied through Europe as a bachelor on multiple occasions). Anne and Fred were married a few months later and Anne moved to New York City, where Fred had an apartment in Greenwich Village. Shortly thereafter, Michael was born and the family moved first to an apartment in Queens, NY, and then four years later to a house in Suffern, NY. Anne and Fred shared a passion for antiques, and they spent many weekends going to antique auctions and antique shows. Their house and basement (where Fred restored the furniture and clocks) quickly became filled to the brim with antiques, and throughout the house were the sounds of dozens of clocks ticking as well as striking on the hour and half hour. Soon thereafter, Anne opened an antique store called Anne-Tique-Tock in Nyack, NY. After many successful years with the store, Anne decided to focus on antique jewelry. She closed the store and decided instead to regularly rent booths at some of the biggest antique shows in New York City. She developed a successful antique jewelry business and was a regular visitor to New York City’s diamond district, buying and selling antique jewelry and pocket watches, as well as taking pieces on consignment to sell at shows. After Fred passed away in 1989, Anne bought a house in Boynton Beach, FL, and she spent half the year in Florida and half the year in Suffern. Although she stopped renting booths at shows, Anne continued to be involved in the antique jewelry business, and could be found going to winter antique shows in Florida and summer shows in New York, buying and selling jewelry. Despite this passion for antiques and shopping, what was most important to Anne was her family, her relatives, and her friends. She loved spending time with her family and her relatives, particularly her sister Jeanette and Jeanette’s husband, Joe, and her niece Maura and nephew Bobby, and Joe’s family as well. She also loved being with her friends, particularly those from her childhood that she remained close to for almost 90 years. She was a remarkably devoted mother, and nothing gave her greater joy than seeing her children succeed. That is, until her grandchildren came along! She enjoyed spending countless hours with them and was always there to babysit, and took them frequently to the store to buy toys, food, and candy. And how she loved buying clothes for, and going clothes shopping with, her four granddaughters! She was generous to everyone she met throughout her lifetime, including her caretakers later in life. She spoke frequently about the pride she had in volunteering at hospitals in Boston as a young adult, about donating to and supporting various charities, and of her involvement in Hadassah (a Jewish woman’s organization). Having grown up in an orthodox home, her Jewish faith was particularly important to her, and everyone was incredibly proud to see her finally be able to have a Bat Mitzvah ceremony as an adult in 1993. Funeral services will be held on October 3, 2022, at 12:30 pm, at the New Tifereth Israel of Everett Cemetery, 232 Fuller Street, Everett, MA. Donations can be made in Anne’s name to Hadassah, 40 Wall Street, New York, NY 10005 (or online at Hadassah.org).
See more See Less

In Memory Of Anne Jean Horowitz