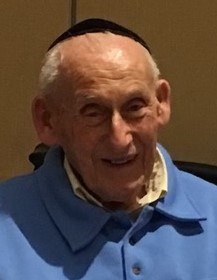 Irving Backman, 96, passed away peacefully at his home in Dedham, Massachusetts, on May 8, 2022, with family members at his side. His wife, Charlotte, had passed away on Feb. 28, 2021. He is lovingly remembered by his son Larry Backman and his wife Judith Hoffman of Falmouth, Massachusetts, and daughter Ellen Kent and husband Dana Kent of Brandon, Florida. Another daughter Joan predeceased him. Irving is also the cherished grandfather of Jenna Friedman and husband Daniel Friedman of Columbus Ohio; Allison Gasca-Backman and husband Santiago Gasca of Annandale, Virginia; Caren Hoffman of New York City; Sam Hoffman of Princeton, New Jersey; Jerry Kent and his wife Elisheva of Jerusalem; and Joanna Glebocki and her husband Ian, also of Jerusalem. In addition, Irving is fondly remembered by his seven great-grandchildren Miriam, Rachel, Sara and Tamar Kent, Rachel Esther and Zehavah Leah Glebocki and Felix Friedman. He was the dear brother of the late Jack Backman and a loving uncle and great-uncle to numerous other relatives. Irving is also mourned by his former daughter-in-law Carol Sarshik. At age 95, Irving visited his Jerusalem family last year. Born on April 25, 1926, in Saugus, Massachusetts, to Saul and Edith Backman, Irving grew up in nearby Lynn and Swampscott, as well as Saco, Maine, and attended Thornton Academy and Bowdoin College, both in Maine. He served in the Army Air Force during World War II. In 1951 he graduated Northeastern University with a law degree and was a class marshal. He married Charlotte in 1952 and resided in Newton. For more than 30 years, he was a leading field underwriter for life insurance company Mutual of New York. In his retirement years, he found his second calling as investor and entrepreneur for a variety of U.S. and Israeli biotech and life science companies. In recent years, he was particularly passionate about harnessing technology to address environmental issues and promoting sustainable agriculture. He was an avid runner and tennis player, gardener and amateur pilot. He was a tireless fundraiser for the Combined Jewish Philanthropies and B’nai B’rith and prided himself in helping people in need through charitable efforts. Private services have been held. In lieu of sending flowers, donations can be made to Combined Jewish Philanthropies, www.cjp.org or the Jewish Community Center of Greater Boston, www.bostonjcc.org
See more See Less

In Memory Of Irving A. Backman