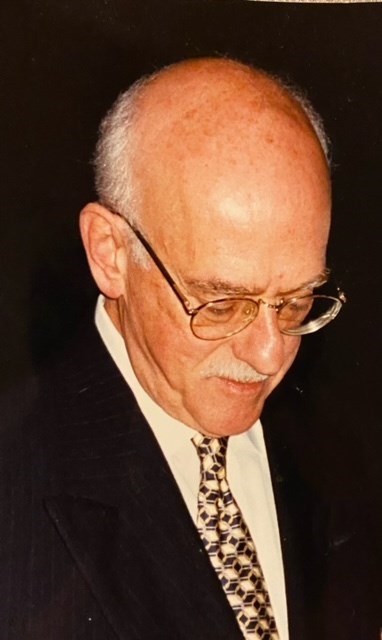 Robert 'Bob' Bonin, 90 years old of Jamaica Plain, Massachusetts, passed away on Monday, November 22, 2021. Son of the late William and Beatrice Bonin, Bob was an esteemed member of Boston's Legal and Government communities for more than fifty years. Educated at Boston Latin School; Boston University's College of Business Administration, graduating Magna cum laude in 1952; and graduated first in his class from B.U. Law School in 1954. After a year fellowship at George Washington School of Law, Bonin served as an Army JAG, 1955-1958 Robert Bonin practiced law and was a highly regarded trial attorney for more than twenty years before accepting the first assistant attorney general position under Francis X. Bellotti. Following his time at the A.G.'s office, Bonin became Chief Justice of the Massachusetts Superior Court. In 1978 he returned to private law practice, retiring in 2019 at the age of 88. Bonin was known for his quick wit, breadth of knowledge, and tough-minded approach to Government Reform. He was also a fine piano player and fancied himself a singer, having an extensive memory of most songs written in the 1940 and 50s. He taught 'Introduction to Law' at Harvard University with his son Mark for six years in his later years. Bonin married twice, first to Phyllis Keselman and second to Angela Randall. He is survived by his three sons Joseph, Theodore, and Mark Bonin, two stepchildren Amy Randall and Joseph Randall, and several grandchildren. Services Friday, November 26, 2021, at twelve-noon at Sharon Memorial Park, 40 Dedham Street, Sharon. Donations in Robert Bonin's memory to the American Civil Liberties Union.
See more See Less

In Memory Of Robert Mathew Bonin