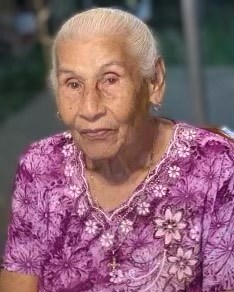 Petra Medina, age 89,entered into eternal rest Monday, January 17, 2022. Petra was born August 1, 1932. Loved by her children and revered by her grandchildren, she was our matriarch, the center of our family, a woman known for the majority of her life as simply Ama. Ama was born in San Luis Potosi, Mexico, in 1932. She was the youngest of eight children, and the only one with the green eyes that appeared in the family once in a great while. By her own account, she was a feisty little girl. She had very little schooling, going only as far as "tercero de primaria." Some years later, as a young woman, she met the love of her life, Bernardo, and she settled into her life's work - being a mother. There was only a brief time when she worked outside the home. The death of Bernardo left her a widow with six children at age 41. For the first time in her life, she put on a pair of pants and took over her husband's labor job for a few years. As her children grew into their own lives, Ama (and her tortillas) remained a constant and welcome presence. The years passed, and she acquired a houseful of grandchildren. Their Sunday visits were a highlight of her week. She loved nothing better than seeing her table full of grandkids enjoying her food. There was a time when we thought Ama would live forever. Her life was not an easy one, but she faced hardship, loss, and illnesses with strength and courage and an indomitable will to live. After all, her family still needed her. When she learned that this last battle was not to be won, the only place she wanted to be was at home. Her children tended her, grandchildren came from near and far to sit at her bedside, and the youngest great-grandchildren (including a baby girl with green eyes that mirrored hers) were held up for her to see. And so, as Ama's life ended, she was surrounded by her life's work - the family she created. Her life was a shining example of unconditional love and selfless devotion, and her memory and influence will be with us for generations. Ama is now reunited with her husband Jose Bernardo Medina, her sons Jose Ezequiel Medina, and Rufino Medina, five infant children, her parents, and six siblings. Left to forever remember their beloved Ama are her son Abel (Veronica) Medina, daughters Rosa (Arturo) Marino, Sandra Medina, and Angelina Medina, daughters-in-law Carmen Medina and Yolanda Medina, her grandchildren Damian and Izel Medina, Yara Aguilar, Griselda (Rogelio) and Elaine Medina, Victoria (Mark) Garcia, Vanessa, Valerie, Vivianne, and Veronica Medina, Alexandra and Ariana Marino, Victor Michael Olvera, and great-grandchildren Lynn and Briana Garza, Andrew and Yarita Perez, Roen, Roman, and Eliana Gonzalez, and Amelia Garcia. Also surviving her are her brother Panfilo Moreno, and many nieces and nephews. Words cannot express how much we will all miss her. All we can say is Gracias, Ama. Te queremos mucho. The family wishes to thank Safe Haven Hospice personnel. Though their time with Ama was brief, their tender and efficient care allowed Ama to reach her end with comfort and dignity. We are forever grateful. Visitation will be Friday, January 21, 2022 from 2pm - 9pm with a rosary at 7pm in Chapel of Peace. A chapel service will be Saturday, January 22, 2022 at 9am in Chapel of Peace followed by a burial at Buena Vista Burial Park. Funeral arrangements have been entrusted to the care of Funeraria Del Angel Buena Vista, 125 McDavitt Blvd., Brownsville, Tx., 956-541-5400, Dignity Memorial Provider.
See more See Less

In Memory Of Petra Medina