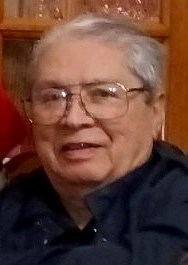 Rodolfo (Rudy) Pizano, 86, passed away peacefully with his family at his side at Valley Regional Medical Center, Brownsville, Texas on Friday, January 21, 2022. He is now reunited with his parents, Gonzalo Pizano† and Natalia Avila† and his brothers, Arturo† and Guadalupe Avila†. He married the love of his life, Mary Hernandez, on January 6, 1957. Rodolfo was a lifelong resident of Brownsville. He was a hardworking man that loved and was committed to his wife and family. Family was his top priority, as he was respected as a man of his word and a devoted Catholic. He was the rock, stability, source of strength and provider for his family. He was owner of Rudy’s Barber Shop until retiring and later worked for Los Fresnos ISD, to occupy his zest for life while serving and giving to others. To all who knew him, he was a unique and caring individual who touched lives and in return touched his. He is survived by his beloved wife of 65 years, Mary, and their 5 children; Margarita Pizano-Flores (Jose Luis), Mary Aten (Lane), Mike Pizano (Mireya), Irasema Pizano-Puente (Martin), Yolanda Bisco; six grandchildren, Dr. Michael Peña (Ashleigh), Jason Peña (Saharnaz), Danny Pizano, Roselinni Pizano, Stephen Flores and Casey Lynn Garza; one great-granddaughter, Gabriella Peña; and many nieces, nephews and friends. Visitation will be Wednesday, January 26, 2022 from 3:00pm - 9:00pm with a rosary at 7:00pm. Viewing will continue Thursday, January 27, 2022 from 8:00am - 1:00pm. Funeral services will be at 2:00pm with interment at 3:00pm at Buena Vista Burial Park. Pallbearers; Mike Pizano, Danny Pizano, Jose Luis Flores, Stephen Flores, Jason Peña, Martin Puente and Lane Aten. Funeral arrangements have been entrusted to the care of Buena Vista del Angel Funeral Home, 125 McDavitt Blvd, Brownsville, TX., (956) 541-5400, Dignity Memorial Provider.
See more See Less

In Memory Of Rodolfo Pizano